When your kid calls you old on your birthday

Another birthday has come for me. Another year that I'm running from my 40s.


I guess for a 10-year-old, anyone older than a teenager seems ancient. I remember telling my mom the same thing when I was his age. My mom, with her 1980s shoulder pads and ruffled jean skirts, worked hard to take care of four kids and a household while juggling a secretarial job. She was 40. I never could have imagined that in a blink I’d be the one with four children just trying to keep up with much of the same… minus the shoulder pads.
Getting old is tough to swallow. Literally – I almost choked on a piece of celery the other day and wondered if I had good enough panties on for when the EMT guys showed up to resuscitate me. Things aren’t as perky as they were in my 20s and 30s, my skin has seen better days (sun damage from years of baking in the sun with baby oil). The fabulous metabolism I once knew has long since packed up and took with it my ability to eat an entire pepperoni pizza and a root beer float without gaining a pound. It’s hard to lean over and put on socks some days without feeling like my back might go out –too many attempts at roundoff back handsprings at bars, I think. The miniskirts, cut out tops and butt-showing-shorts young girls wear now don’t look as cool as I thought they did many moons ago when I smuggled them places to change into after mom dropped us off. I find myself swearing my daughters will never leave the house looking like that.
My son can't believe there weren't any cell phones when I was his age. We actually looked out the car windows and counted cows on road trips – in the back hatch of a station wagon most definitely not seatbelted, flailing around like rag dolls. No iPads back then, son. We played in tree houses, built backyard forts and traded Betty Boop stickers. We rode our bikes around the neighborhood and made up 17 different ways to play tag with our friends. We roller-skated up and down the driveway and drank watered down Kool-Aid and generic vanilla creme cookies for snacks. There were no organic, gluten-free, sugarless, colorless snack options when you played at a friend's house. If you were allergic to it, you just didn't eat it.


We watched the Smurfs on Saturday mornings and we learned all our life lessons about drugs and premarital sex from ABC after-school specials. We walked door to door for five hours to sell one box of chocolate bars for 50 cents apiece. Our moms sewed together our ladybug, bumble bee or Raggedy Ann Halloween costumes and we used old pillowcases to trick or treat.

We sat inches away from a thousand-pound wooden box on the floor to watch The Cosby Show before bed on Thursday nights. We grew up with posters of Ricky Schroder and Corey Haim on the wall. I’d listen to my jambox all night to catch a Rick Astley song on the radio that I only managed to tape half way through on a cassette. We even had to stick our fingers into those cassette holes to rewind it back up if the tape came undone.
Prehistoric times, my son thinks. I may as well have told him I grew up with dinosaurs in the back yard.
I tried to get my son to watch Back to the Future with me, telling him this was the biggest blockbuster when I was his age. There's something about 1980s Michael J. Fox that makes me feel warm and fuzzy, like the world is still ok. My kid tells me it looks, "old timey." Ugh. I try to rock out to "Careless Whisper" to my childrens' blank stares. They act like they don't know me when I pretend a drum solo to Air Supply's "Makin Love Out Of Nothing At All." One time, before a soccer game last fall, I blared "Eye of the Tiger" on the car radio. I tried to tell the kids this anthem is the reason people win games, it’s how they get excited about their potential and accomplish their dreams of becoming a champion. It’s how you beat Apollo Creed! I yell at them. Unimpressed, my son declares, “this music sucks.”
He forces me to realize these are all things I mused as a 10-year-old, too. I hated my parents’ music (the tune of Rockin’ Robin, anything Buddy Holly or Frankie Valley and the Four Seasons is still like nails on a chalkboard to me). I remember thinking how ancient my parents seemed when they told us about dime store bubble gum and baseball cards. Mom used to tell me how surprised they were to get a block of wood and a single candy cane wrapped up on those late-1950s Christmas mornings. They wore saddle shoes and thought Ricky Nelson was dreamy. I will never act as old-fashioned as them, 10-year-old me promised. I’ll let my kids wear whatever they want and let them go to sleepovers whenever. I remember telling myself I’d never say, “when I was young…” to my children. I vowed all those impossible promises that adolescents declare.
So here I am, one year older– definitely not wiser. I  still fumble through parenthood basically repeating all the things my mother told me 30 years ago. I can’t help but reminisce about the good ol’ days to my children like some grandpa on a front porch rocker. I tell them about a time when life was simple – back when we had a (sane) actor for a president, when my allowance was $1 a week and I babysat for $2 an hour. Yes kids, once upon a time there was a pop star named Michael Jackson and he was bigger than Justin Bieber – but probably made the headlines just as often. I tell my kids about how I never complained about what was on my dinner plate, and if I did I probably went to bed hungry. They hear about how I stuffed books in my pants before my dad came up the stairs to give me the whooping I deserved for sass-mouthing my mother. I tell them how lucky they are to get a brand new pair of shoes, because when I was little, the only “new” crap I got was a gently used training bra from the girl up the street.
This all sounds familiar, I think, recalling the stuff my mom said to me back in my bedroom in 1986. This is how that beautiful circle of life of parenthood goes around, and it’s what is going to happen to my son someday when he has his own kids. Maybe his kids will laugh because there were no flying cars or microchip computers inside everyone’s heads “back then.” He'll probably be uncool because we weren't able to clone our dead pets or something. I suppose they’ll say he’s old-timey because space travel to and from Mars wasn't possible in 2018. I know he’ll get his someday.
I just hope I get to see him wince on HIS 42nd birthday, when his kids tell him how bad his music sucks, that his movies are lame, his clothes are ugly and that he's old, too! 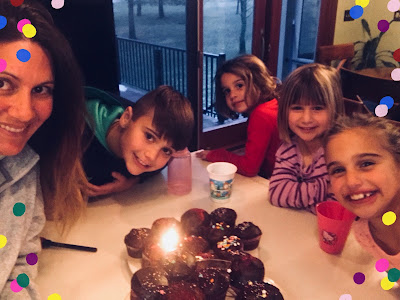