Today's descriptors: Bleeding and hanging on

For those of you out there that tell me you enjoy reading my posts because I am "real, raw, open and honest" about life... this one's for you. If you do NOT enjoy real or raw, please close the blog now. You have been warned, because I'm about to get pretty real here.

Ok, some may remember that I wrote in a post recently how I was "literally hanging on by a thread" some days… and I was actually criticized from internet strangers worldwide for many issues it seems, but one guy questioned my grammatical correctness in using the word "literally” to construct that sentence. I was told that there was no possible way for me to "literally" hang on by a thread.

Well, my dear internet stranger who called me grammatically stupid, I'm about to make you eat crow.

Let's just start out by saying that turning 40-something last week didn't seem so bad. For like a day. But pretty much after that, it's been kind of sucking. Let me just say that when you get your period on your birthday, you may think it's a sign telling you, "hey girl - you still got this whole womanly, motherly, healthy childbearing thing going on girl! woot! celebrate it!"

But no. It's not. Because that was like eight or nine freaking days ago, and I don't know if this is like a precursor to getting old lady uterus stuff, but I've been bleeding pretty solid now for a scary long time and I'm starting to think this sh*t ain't right.

I'm not new to this friends, I've been doing this since I was 13, so I'm not joking when I say that nobody should be losing this much blood from her hoo-ha, ever. Not even with the birth of my last child five years ago—she came out at 4 p.m. on a Wednesday and by 9 a.m. Thursday morning, I high-fived the nurse, put on a panty liner and I went home. Meantime, this past week has been like a never-ending battle scene from Braveheart up in here.

And just to make sure things don’t get too boring, our dog has apparently reached her womanhood too—because she started bleeding this week as well. So I’ve seriously been following a German Shepherd around the house dabbing her peepee and wiping up blood spots with Resolve carpet cleaner wherever she goes. She sometimes goes on the brand new white carpet I had put in my bedroom last week, too.

So there was that.

Meantime, I think my kids can smell fear—or blood—one of the two, and have gone batsh*t crazy with each other, fighting like pit bulls. I barely have a voice from scolding and time-outing and reprimanding this week. Today the drama was over Legos. Because the 742 sets of Legos we have upstairs aren't possibly enough to share. I hear some yelling and a slam of a door. I get my intimidating mom stomp on up the stairs and bang on the locked door telling them to "open this door at once!" 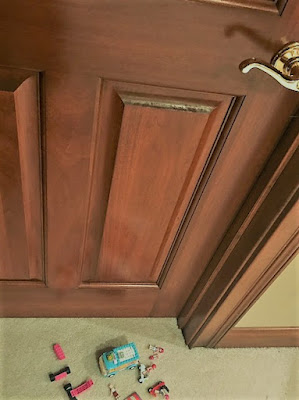 That's when I see that all three girls are behind me and one of them has slammed the bedroom door shut locking all of us out in the hallway. Now, I know that all houses have those little, skinny key things that you put ontop of a door frame for just such an occasion, and if Matthew were here, he'd know where it was or figure this out because I can't find any such key in this entire house. I stomp back downstairs all the while telling them they "messed with the wrong mom today," and "nobody is getting snacks for a week!" I come back with a skinny nail and try jamming it in there—seriously why is a bedroom lock on a house built in 1995 so damn hard to crack? I realize now if there's ever a home invasion, everyone needs to make it behind Payton's Fort Knox bedroom door. I will call this the Panic Room now.

Still locked. I need a breather. I google how to break in doors. My browser still fresh from looking up "menstrual synchronization with dogs," probably. At this point, my body has no blood left in it and I'm running on just plasma and Baileys/coffee. Not to mention Web MD is wondering what the hell is going on in northern Kentucky after seeing my search, “42-year-old woman bleeding” for several days now.

I brilliantly remember that the locked bedroom door is connected to the outside second-floor balcony. After ruling out trying to shoulder-hold one of the girls to climb up to the balcony, I triumphantly tell the girls to wait inside because mommy is going to climb up over the balcony outside and into the room. I retrieve the 8-foot ladder from the garage and prop it up under the porch and get to the top "DO NOT STAND" rung. I stand on it. I'm now grabbing onto the snow-covered porch railing spindles and readying myself to throw a leg onto the balcony. I'm a little short, so this is going to take some major upper body strength. I ponder on the last time I was at the gym. It was not recent, friends. Just before I hoist myself up and over, I see the now-evident dry rotted spindles I'm holding onto and I calculate my weight and the speed at which I could pull myself over before said spindles snap off and send me backward onto the snow-covered concrete below.

For a second, I picture myself laying half dead (wondering about which panties I have on and the amount of blood I've already lost and how I couldn't possibly spare anymore) and whether the girls would know my phone passcode to call anyone or if they'd just go back to playing Legos. So I'm hanging off my second story balcony with only one leg touching the ladder realizing that maybe I probably shouldn't die doing this today. There's been enough bloodshed between the dog and me today. Maybe the locked door is just going to have to get the better of me this time. I decide to let this battle go.

And THAT, my internet grammar police friend, is how a woman can LITERALLY be hanging on by a thread some days. Do not ever question my use of that word again.