When our anniversary became an ordinary day

Today was supposed to be our 17-year wedding anniversary. We used to do fancy dinners. We did trips. We did sappy cards. We did... other stuff. Not today. Last night I went to your grave because I guess I thought we'd always be together every anniversary. Sitting there picking grass in front of your headstone, I realize October 26 has turned into just another day now.

According to the Internet, the traditional gift for 17 years of marriage is furniture. I thought about how if you were here I'd tell you that and I'd try to get you to buy me a new chair or something. Actually, there's a cool sofa table thing I saw at a home store I am thinking of getting. I took your silence and the absence of signs (no butterflies, no lightning and thunder) to mean you don't care if I buy it. I'm probably wrong on that one though.

The kids visited here a couple weeks back with your mom and walked around the gravestones. They came back telling me how somebody stole the ceramic angel flower vase off your grave and at first I wanted to be mad. But then I kinda laughed. And laughed some more. Because I think you'd have probably laughed too.

It made me remember the time you told me you were driving home from work and you saw a guy pushing one of the Remke Markets grocery carts down the street, away from the store. Knowing that those carts are pretty expensive, you pulled over and asked him where he was going with it. You laughed when you told me the man (who clearly realized he was caught with stolen property) told you he was "taking it home to fix it" because it was broken, and that "it was ok, because he knew the owners." LOL right?

You politely told him you were the owner and that you'd like him to just put it in the back of your truck so you didn't have to involve police in the theft of one of your carts. You didn't say a word even when the man accused YOU of being a jerk by asking for it back. I was so fired up and pissed off about it back then—but I remember you weren't. You were always good and calm about stuff. Even when someone was right in front of you trying to steal your shit, you just let it roll. I tell the kids about it. I tell them about your compassion and your tolerance for others, even when people were being jerks. Be that way too, I tell them.

I still get fired up about stuff. Like on the way to the cemetery, I was stuck behind an old lady who thought the speed limit was 2 mph. I think I may have mumbled an explicative under my breath. I'm sure I tore around her at some point and gave her my best exasperated, annoyed look. Seems dumb now though doesn't it? Like, "Hey lady I'm in a fucking hurry to go wish my dead husband a happy anniversary, so move it!" When I was pulling out of the plaza by the gas station later on, some guy honked at me thinking I was going to ram into his car. "For God's sake I see you! Calm down," I screamed (ironically) at him through the window. I guess that was easier to yell than "Can't you see my tear-stained cheeks from all this crying I'm doing!? Cut me some slack it's my fucking anniversary!"

But this is the way I am. I never was like you no matter how hard I have ever tried to change. Why does my mood get so dark and my temperament go from zero to blow up in a blink? I know there are probably a million reasons why, but today there's only one that's evident... I wanted more anniversaries. I wanted years of clinking wine glasses over the table and plane rides together to tropical all-inclusives. I wanted to be old together. I wanted all of it with you. It makes me mad we never got it. Our kids never got it. Our youngest started crying at bedtime the other night and asked me, "Why did daddy have to die?" And I got so mad because after almost two years, I still don't have an answer. I don't fucking know.

The kids and I decided we wanted to do laser tag today and we all shot each other up and laughed a lot. We ate at a loud hibachi grill with your dad, yummy but nothing fancy. I probably won't buy any furniture today either because it's raining cats and dogs and I don't have the patience to fight rainy mall traffic. I brought our son to the shooting range too. Because what better way to blow off some steam than shoot up shit? We blew off tension and sadness and anger over missing you because some days those feelings are palpable. I even took our son out on a date this weekend. We ate burgers and shakes. Afterwards we stood in line waiting at the cashier forever because the register was down. My patience was wearing thin, like it always is. But I turned and looked at our son, a mirror image of who you were, and he was smiling. Laughing actually, at the fact that these tiny, hellish inconveniences I experience are really no big deal. Just like you would have done. I didn't lose my mind because I looked at him—I looked at you.

Many days I am still mad. Like fire out of my ears mad. Because you're still gone. We're still here doing this alone. And no special observance of a miscellaneous date in October will ever change that. But shooting up stuff with the kids—especially with a boy who is a beautiful reflection of who I married 17 years ago—sure felt good. 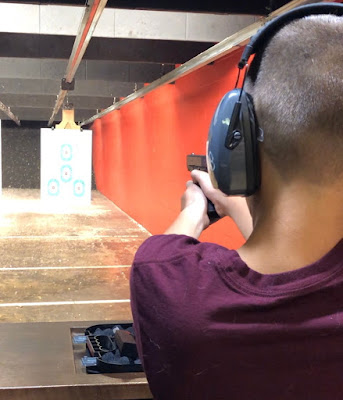