Saying goodbye to that miserable me

My son and I were tossing football in the yard the other day and he caught me off guard after he ran straight for me and slammed the football into my stomach. This was his classic quarterback handoff and I was supposed to run with it—which of course, I nailed. Then he said, "dang mom, your abs are rock hard!" After laughing because my 12-year-old son actually noticed his mom's physique, I told him, "damn straight boy."

But a few years back, this exchange couldn't have been farther from reality.

When I met my late husband Matthew in college, I was about 115 pounds. And it was probably after eating a cheeseburger and three amaretto sours. I used to run miles around campus every day, did cartwheels and handsprings at parties and bought tiny low-rise jeans from clothing stores WITHOUT EVEN TRYING THEM ON. Ahhhh. Youth and metabolism were on my side back then. It was a dreamy time. 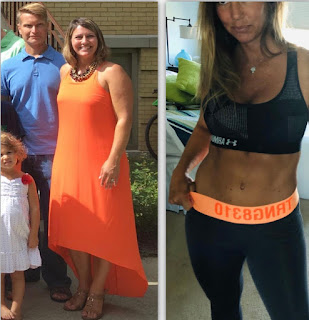 Over the years, I had always been able to keep a steady weight. I wouldn't say I was ever overweight but after three pregnancies, stress from mothering four little ones and having a slight addiction to Oreos there's no way that 115 was going to be sustained. And it wasn't. Just before Matthew got sick, when we had some rough times and we were in counseling for the umpteenth time... I started getting umm... thick. And the scale at the doctor's office didn't lie either. Some people didn't notice it too much, and I joked about having "winter weight that stuck on for the summer" —but I felt dumpy and big.

I had given up. At pretty much everything —my communication with my husband in my marriage, my patience (or lack of) with my kids, and especially my body. I just didn't care anymore.

So I made brownies. Like EVERY freaking day. I'd say they were for the kids but I easily ate half the pan. I looked up new dessert ideas on Pinterest and I made ice cream shakes after dinner. I'd eat Entenmanns chocolate donuts in the morning and sneak into the kids' Halloween candy after they went to bed (Butterfingers = my Kryptonite). If I felt bad about myself before, I was really feeling shitty by this point. My back hurt, I hadn't run in ages and I couldn't stand looking at myself in a mirror. I hated me. Not even the Walgreens clinic nurse who performed my health insurance screening that month could wake me up with talk of "bad cholesterol" and the hideous number she wrote down for my weight.

Meantime, Matthew was working out at the gym with his buddy pretty often and was trying to stay healthy (he'd been losing weight around this time, which we thought was because he was going to the gym but we'd find out soon cancer was looming around the corner). And even though he and I weren't on great terms, every day he'd still ask me if I wanted to go with him. I said no. He tried to help me make myself feel better. He saw the misery that I tried so much to hide. At the back of my head I knew nobody was going to get me out of this funk except me. But I just didn't want to. It was almost like punishing myself for feeling like the inadequate wife, mother, daughter—everything that I was convinced I was. If the rest of me was going to be shit, so was my physical body, I thought.

Matthew and I didn't talk about it much (we didn't talk about much of anything then) and his work kept him busy and the kids kept me busy. It wasn't until a beach vacation we took alone that December where I saw pictures of myself that I didn't recognize. I begged him to delete them from his phone. How had I been ok looking and feeling this miserable every day? Not long after that, he got his diagnosis and life went into even more of a tailspin for us. At that point, food continued to serve as a comfort to fixing every aspect of my life that was broken.

It wasn't until last fall, a year after Matthew died, that I finally realized I didn't want to continue that way. I didn't want to be frumpy and unhappy and feeling like crap every day as the sole parent to four kids who deserved a better mom. I also knew I didn't want to be alone forever. Because after my kids are grown and gone someday, I don't like the thought of withering away alone and unhealthy in a bed covered in Chips Ahoy crumbs (We've all seen My 600-pound Life, so that's totally possible).

I started running again. I started going to the gym and lifting weights. I tried so hard to eat healthy and drink water. I tried to have self control when I wanted cake or brownies with the kids. I won't lie—I might have had a bite or two —but I had come a long way from eating half the pan.

I'm down 15-20 pounds from those cringe-worthy pictures. I still try to run or swim every day. I go to the gym when I can. Some days I don't feel like doing anything. I still have my weaknesses (peanut M&Ms) and I cheat (because martinis and Moscato still have sugar in them). It would be easy to go back to inactivity, poor eating habits and misery, sure. But I don't want to go back to that big, unhappy girl. Being healthy was a choice I thought my kids deserved. It was definitely something I wished I would have done when Matthew was still alive because he deserved a happy, healthy wife. But mostly I can admit, I deserve it. We all deserve to be our best healthy, happy selves.

And being fit is also a sure way to adequately nail a football handoff from your son.