When the TALK comes in the middle of aisle 8

My only son is going to be 12 this month. I never had any brothers. I know a couple things about boys his age, like the funky smells, the reclusive attitude and the ravenous appetite. But I don't know all that much about boys and puberty and their ...things... and all that. Nothing. Zero. This was supposed to be his dad's territory. Dad was supposed to take care of all this stuff.

Since dad's not here to take a swing at this, I'm on deck.

We have not yet begun to chip away at the iceberg that is The Sex Talk. I don't remember getting a talk back in the 80s when I was his age. I think one of my fifth grade friends enlightened me to where babies came from and how they got in there during recess one afternoon. I suppose it was good enough for me back then - parenting these days is wildly different. From what I've heard, if you haven't gone over Sex 101 with your kid by the time he is 9, you are likely creating some sort of uneducated sexual deviant child who may or may not become a serial killer. So I'm going in for the talk.

I bought a book for him a couple months back, "Your Changing Body" or something equally cringe-worthy. I left it on his bed one night and noticed it was on the floor under some clothes in his closet not long after. I told him, "hey, so we might have to, you know, talk about some of those things in that book sometime, ok?"

Quicker than you can say mortified, he replied, "Mom, no. Just NO."

And so it's been a big, fat NO for several months now and I haven't really forced it on him either. He kind of avoids me as I suppose any prepubescent boy avoids his overbearing and overprotective mom. He goes about school, practice and life with his buddies like normal and leaves his mom wondering what things he already has seen or what things people have already told him. I try and catch a glimpse of his reaction when he sees certain interactions on TV or hears innuendoes in songs or movies. I never know really how much this sweet boy of mine knows about it all.

I took him shopping for a new basketball the other day at the sporting good place. It's a place where I can actually get him to say more than two words to me - even if it's just "please Mom, can I get this?"
We walked the aisles together and I got a lesson in how there are indoor basketballs and outdoor basketballs and that there are certain sizes you need to play here or there. I learned about how Under Armor is obvs way better than anything with an Adidas logo on it and how he has already grown out of a $100 pair of sneakers I bought him like … three minutes ago.

After a while, we passed by a bulky, errrr… generously endowed mannequin in the men's section dressed in tight boxer briefs on our way to the checkout. He and I both looked at it. I probably looked at it a little too long. I am never one to know when to close my mouth, act natural or you know, have tact. And before I even realized it, I blurted out loud, "God, I miss your daddy."

And that's when an almost 12-year-old boy and I started laughing hysterically together in that sporting good store aisle and we couldn't stop. Walking out of that store with a boy who encapsulated on his face the sweet grin of his father's, his laughter and sense of humor too - that's when I realized we had taken the first chunk out of that iceberg. It's going to be ok. The talk will come and it'll be ok. He's not going to be a serial killer. He's going to be ok. 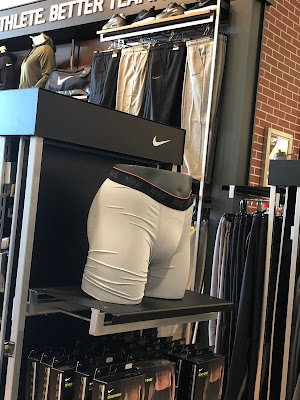