Last summer my friend dragged me to an outdoor concert where a Billy Joel tribute band was playing. I'm a huge Billy Joel fan, but I didn't want to go, especially to hear any junky band butcher covers of my beloved Billy. But in the spirit of saying YES to things these days, the kids and I went. As the lead singer came out and started to sing, I stopped mid-conversation to turn around and pay attention because I was blown away.

This guy not only had the stage presence and visage of Billy Joel, but he played the piano and sang just as magnificently as the Piano Man himself. The resemblance was undeniable– and that is saying a lot coming from me. He engaged with the audience exactly as Billy does at his shows and even told the crowd to throw out requests. I shamelessly told my daughter to yell for him to play 'Summer, Highland Falls,' which is my favorite Billy Joel song ever. He didn't end up playing it, but I'd find out why later.

My children danced around in front of the stage all night. I kept thinking I had to meet this guy, I had to be friends with this person. Whoever he was or wherever he was from, I knew we needed to be friends. At the end of the show, I found him at the side stage and complimented him and his band for such a phenomenal show. We ended up talking a while and long story short, we became friends– because how do two people obsessed with all things Billy Joel since birth NOT become friends, right?

So Mike-with-the-uncanny-resemblance-to-the-Piano-Man apologized later for not playing my song, "oh shit that was your kid who requested it!?" he said. It's one of his favorites too, he told me. There is one line that kills me every time, I told him. "For we are always what our situations hand us... It's either sadness or euphoria." It's a song that evokes a lot of emotion, and he mentioned there are times he can't get through it without getting choked up. I get it, Mike. Me too.

My life this past year since I lost my husband Matthew has been much of that– extreme highs and some really low lows. I've gone from crying on the bathroom floor some nights (because it's the only place I can shut and lock a door to keep kids out) to feeling high on a cloud because I got asked out on a date. With, like, a real live man. Grief tosses you back and forth like this and it can give you emotional whiplash sometimes. It's hard to manage how you feel some days. It's hard to put into words talking to friends. But that's when many times music can do it for you.

Many of my friends might remember how I wrote a while back about attending a Billy Joel master class concert at the University of Notre Dame in 1996. I shared how I got the microphone that night and how Billy Joel answered the questions of a giddy 20-year-old me, and even sang my name to the tune of 'Honesty.' Over the years a lot of people didn't believe that story. Including my late husband. I couldn't prove it because it happened back during the pre-cellphone camera era when we lugged 35mm cameras and sharpie markers to concerts.

A few days after I met Mike and his band, he sent something to my email. He found a bootleg recording of the entire concert that night back in January 1996. It was like being gifted a time machine. There I was, on track 9 and 10 – a squeaky college kid chatting up Billy Joel and him bantering back with me and even throwing my name into the chorus of 'Honesty.' I played it over and over. I couldn't believe he found it. He said ever since he met me and heard my story he was on a mission to find it for me. I couldn't stop smiling. I laughed thinking how fun it would have been to play this for my husband. My own, "I told you so."

Mike and I keep in touch. We regularly "geek out" to Billy Joel stuff, as he says. So when I message him to tell him I'm sitting alone in a parking lot crying to "Until the Night" –one of my favorite songs off Billy's jazz album '52nd Street' –he just gets it.

Last night Mike's band was back in town. The night before, he texted me to ask if I had any requests. So I gave him my favorites– 'Rosalinda's Eyes,' 'Angry Young Man,' 'Honesty' 'All For Leyna' and he even played 'The Stranger' (after I texted him on the way there because the Uber driver said to tell him to play that one). And as my girlfriend and I sat through the show with crowds of people all singing along with us, my new friend Mike gave me a shout-out before he played 'Summer, Highland Falls' just for me. I like to think it was for me, and maybe Matthew, too. Because while he was never a huge Billy Joel fan, he always liked that song.

"For we are always what our situations hand us... It's either sadness or euphoria."

This night was definitely the latter. I'm glad I said yes that night last summer –to the 'junky concert' I didn't want to go to. I think God has a way of putting people in your lives right when you need them– even if it's just to make an awesome new friend. 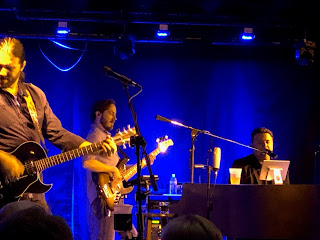 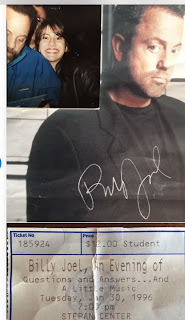