When dreams take a backseat to reality

When I was a little girl, I dreamed of being a jockey.

Like any other 8-year-old girl, I obsessed over horses. I read books about them, I drew pictures of them, I wrote stories about them. My favorite book was Black Beauty. I watched the movie The Black Stallion over and over and imagined that I was Alec the shipwrecked boy stranded on that island with a beautiful racehorse. I even lied to my fourth grade pen pal and told her I had a pet horse in my backyard (sorry to "Julie from Colorado," but I'm a big, fat liar).

The only time I was ever on a horse was during a trip to Disneyland in third grade when my sisters and I stood in line for the pony rides. It was probably the most thrilling five minutes of my childhood. But when your eyes itch and your face feels like it might explode in a barn because you are allergic to horses, it is probably time to find a new dream.

So I took the reins instead of what my mom told me I was good at. I was going to be a writer. I spent many nights in my bunk bed writing stories, drawing illustrations and coming up with silly characters. I won't lie, a lot of the stories had the word "fart" in them and usually involved a main character running away from home on her horse, but at least my imagination was always running with them. 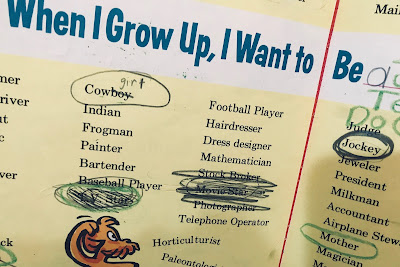 I loved writing essays in school. I filled countless diaries. I craved spelling and grammar tests. I soaked up every Beverly Cleary book in the public library and cherished my paperback collection of Anne of Green Gables. I took all the writing courses they'd allow in college and got an internship at a newspaper. I loved hearing stories and telling them. I grew up in a small Indiana town, but I dreamed of going to a big city, living amongst the skyscrapers, walking to a high-rise office building where I'd bury myself in books and a pen would forever be in my hand. I was going to be a writer in a big city somewhere, someday.

But we all know dreams have a way of slipping through your fingers.

Just before college graduation, I bought a one-way plane ticket to Seattle. I was headed to a beautiful, Pacific Coast city to find myself a job no matter the cost. The ink on my rejection letter from Starbucks CEO Howard Schultz still fresh after I had requested an interview to come join his PR team. "He doesn't know what he's passing up," I told myself. "I'll find something better."

But I never got on that plane. I met a boy from Kentucky not a couple weeks after who was headed to New Jersey for a job offer there. I didn't think we'd make it long distance, living 50 states away from each other. In hindsight, I probably should have just gone with him, but we only knew each other a short time and I had less than $100 in my bank account, which probably wouldn't even get me cab fare anywhere. So I stayed in the Midwest, where I landed a small newspaper job and after a few years, we got married and both moved into a two-bedroom farmhouse in the Bluegrass State. Long story short-- it's been 20 years, four kids and one unimaginable loss later and I still wonder about that dream I had all that time ago.

I found that plane ticket the other day in a box of keepsakes in the basement. It reminds me of the choices we make and how impactful they are at every chapter in our lives. If I had taken that flight, I tell myself, I probably would have found a great job. I would have met someone there and started a different life. We probably would have walked our kids to the Pike Place Market every weekend and I'd probably have learned to snow ski. My office would be in one of those skyscrapers overlooking the Space Needle, I think.

There's sadness that comes with envisioning that dream ever could have been reality. There would have never been a love story with a boy from Kentucky-- that boy who turned into the husband who adored me for 20 years (except for that time I lost the car on Valentine's Day weekend in '99 - he didn't adore me that night). I would never have experienced a laughter so intense that night he and I went to Drake's bar with our friends that night in August 2014-- the night I got kicked out for doing cartwheels and splits on the dancefloor, wet my pants and almost broke my ankle. That was a night for the books.

I wouldn't have had these four brown-eyed children who drive me crazy in love every day and wake me in bed at 5:30 a.m. with knock-knock jokes. I wouldn't have learned how to ride a tractor and bale hay on a hazy summer afternoon. I wouldn't have learned how to pull up and anchor a speedboat onto a houseboat (albeit not very well though). It means I probably never would have held a gun or learned to shoot one, nor would I have realized what an excellent shot I am at hitting a bull's-eye from 100 yards away.

It means I wouldn't have met the close friends I have here who join me every month for Monday night martinis after our kids go to bed. It's hard to think about a life without those friendships and the laughter we share. How could I ever have been happy without them?

Sometimes the chances at a dream can just pass you by.

I accept that now. I can't uproot four kids from everything they know here in Kentucky to plunk them down in Chicago or Atlanta. It would be about as likely as Channing Tatum knocking on my door tomorrow to whisk me away to L.A. (but hey, a girl can still dream, right?)


So I have spent a good chunk of the last decade pondering the what ifs - reassuring myself and rationalizing the choices I made. Despite the fact I don't live in a high-rise or get paid to write about celebrities or take my laptop to Central Park to muse, my job here is just as important. Maybe even more important.

My priorities now are my children and making sure they grow up to be decent human beings. I read them books and tell them stories and listen to their (never-ending) ones. I taxi them to and from swim lessons and gymnastics, knowing these things make them happy. I keep myself just content enough by watching my twins (from outside the barn) take horseback lessons. I jot funny things down for them to read someday when I'm gone, because I don't know if they'll know who I really was outside all the yelling and nagging for them to clean up or to get along. The reward for all this won't be in a plaque on the wall or recognition at some fancy dinner – but I hope in the smiles of four happy kids who will be four amazing adults someday.

My son said his dream is to be a football player. He wants to be the next Tom Brady or Peyton Manning. I keep telling him he'll have to work hard, but he shouldn't ever give up if that's what he wants. In my head, I know what he's chasing could be an impossible dream, but it's my job to tell him it's attainable. I hope to the heavens above that he can do it.

Because you see, that's when he's going to buy his momma a penthouse apartment in New York, where she's going to write books about a little girl and her horse.

This post was published on April 11, 2018 here at Scarymommy.com.