See you in my dreams

I had a good dream last night. I'm surprised I even remember it because I never seem to sleep well enough to even dream most nights anymore.

I found my husband there in the dream. He was alive. He was healthy. He could talk again. We were in some sort of warehouse or empty place. He was on a dock surrounded by water and he was talking to me but I don't know about what. I was only listening to the sound of his voice and the expressions on his face. He was smiling.

I hadn't seen that smile in so long. I was hugging him and I wouldn't let go. I felt his strong arms around me again and I know I was breathless— silly I know—because it was a dream, but it felt possible. Cancer wasn't here this night. Cancer hadn't touched him. It hadn't taken anything yet, his speech, his smile, his body and strength. I was yelling, hello! and asking if he was OK, was everything OK? I can't remember if he answered me, I only remember the hellos and the hugging.
This is one of those dreams that you absolutely don't want to wake up from. That kind that when you do open your eyes, reality slaps you across the face and leaves you defeated to start another day. My husband and I left so many things unsaid when he passed away nearly five months ago. There were so many feelings unexpressed, words unspoken and countless sorries that never made it out of our mouths. There was never a proper goodbye.

I flounder around most days getting the kids where they need to be, acting like I have it all together, trying to smile and joke with friends or elicit a laugh from my son before he goes to bed. But between it all, I'm only looking for him. I stare at cardinals in the trees way too long, stupidly wondering if it's him chirping a message at me. I study the sun rays and clouds to make sure nothing meaningful is spelled out in them. I went to his office a couple weeks back. It was cleaned out and empty because new ownership is downsizing and soon the building will close. Sitting behind a desk where a once powerful, vibrant, healthy husband and father spent his days for the past 15 years— I sobbed. I grabbed all the leftover pencils in his drawer, if only to have something concrete he once touched. I took a Kleenex box from his window sill, knowing it was something he probably stared at from this desk not so long ago.

None of this will bring him back though. None of it brings any closure. None of this is a goodbye.
I clutch a rosary in bed at night—probably one of the many that came to this house while he was sick over the past two years. But not really to pray it. I guess I'm just hoping there's some magical way that out of all the billions of people out there, that some spirit or some force will descend here and get my message to him. To get him to me. To bring him to me again.

I suppose this is why I look for him in my dreams. It's why I keep my eyes shut a little longer every morning. So I don't have to do the goodbye. I can just have that hug again. I can see the smile again. So I can just endure here with only those hellos again.

This post was originally published April 12, 2018 here at Cure Magazine. 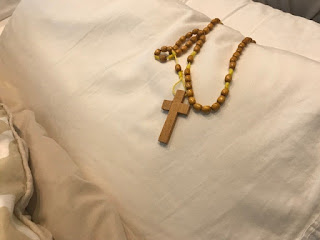