It was another peachy day around here y'all.
Can you hear the sarcasm?

There was a lot of yelling today, a lot of f-bombs I’m not proud of… There were some threats of dessert being taken away and a few 'shut your mouth already!'s … My kids are not gonna look back fondly on this day as a good one in their childhood.

They are killing me. Breaking rules all over. Mia got a clip down at school for kicking another kid. The patience level needed to get Tèa through a math workbook page without crying (both of us) would send Job running for the looney bin. Payton screams like a horror movie actress if someone so much as breathes on her wrong. The boy got sent to his room for backtalking me this afternoon—even though my words to him were far from exemplary.

I ate four bite size Mounds bars, a Reese’s cup, two Snickers bars, two Twix bars and some Skittles from every child’s Halloween basket while they were at school. I’m pretty sure a good chunk of my body mass right now is made up of entirely Tootsie Rolls. But that's not even the cringe worthy part —I forbade them to have any of their candy when they got home from school because, "it’s bad for your teeth," I said. 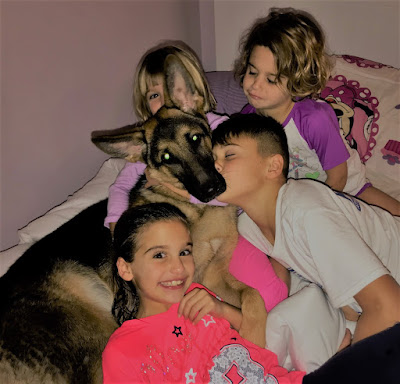 I’m pretty sure I lost my ever lovin’ mind trying to entertain them today before the sun set at f*ing 4:30 p.m. I pulled a package of cake mix from a box in the pantry and pitched it to my kids, who were all holding baseball bats. Yes people, you heard me right. This is my level of parenting right now at this moment. We were trying to hit home runs with a 15 oz package of Betty Crocker cake mix. And apparently we’ve got a slugger in the family because Mia busted that bag clear to Louisville, exploding the cake mix everywhere - mostly in her eyeballs. This is only when I realize maybe this isn't such a great game. She started screaming bloody murder about how bad the cake mix felt packed in her eyeballs and stuck in her eyelids and lashes. We’re trying to wash her eyes out, and the other kids are whining about how it's not fair they didn’t get to bust the package... I yelled and pushed the dog away as she tried lapping up cake mix from every crevice of the driveway.

It was another day of me running around like a chicken with her head cut off. It was a dog-in-her-crate-all-day-long kind of day. It was a mac and cheese with hot dogs and a side of leftover spaghetti night. Yuck. There were a couple smacks on some butts today that I'm pretty sure they could've done without. I was running on empty --or at least on 17 Tootsie Rolls. I needed a do-over so badly today.
It wasn't until halfway through a mandatory parent meeting at school (that I arrived late to, then left early from in order to make gymnastics pickup at 7:30 p.m.) that I realized, this f*ing day isn’t over yet. Maybe I can still make it right. 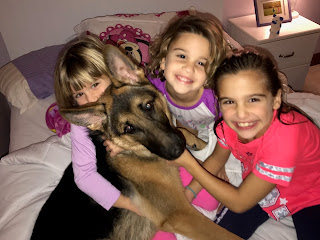 So we salvaged the last few minutes of the day playing a card game — an attempt to teach them solitaire. I don’t even know how to play solitaire, really. We totally cheated, digging through the stack to find all the aces to put at the top and making sure the 2s were at the bottom. Cheers all around 10 minutes later to all our complete rows of diamonds, clubs, spades and hearts!
Four smiles.
We've tried to stick with a "no dog upstairs" rule in the house ..but I'm breaking rules today, too.
We let the puppy up to say goodnight. Juno scampered from every corner to another —running through all the bedrooms —hiding under beds, grabbing slippers and licking smiling faces in a group hug atop Payton’s bed.
We called it, “Puppy Cuddle Time.”
I'm thinking it’s a new tradition we may start some of these rough nights. Because I sure as shit don't know how to save the day.