A little bit about a man who can't be described

Today was a day I have dreaded for months. It was a horrific, painful, emotionally sickening, heartbreaking day.

The best friend I met nearly 20 years ago - the man I stood on the altar with 15 years ago to vow death do us part - was taken away from me. I never knew this kind of heartache existed. I never dreamed a pain this unbearable could overtake me. I never imagined I could hold a sadness this profound inside of me for someone else. So many people knew him as a relative, a friend, a coworker, an acquaintance - to others he will be just someone they read about in the newspaper obits on page 7.

I want to tell everyone about who he really was - because he was infinitely more.

He was the shy boy I met in college who I just couldn't get enough of (although he I'm sure probably had enough of me by date #2). He was the guy with a sense of humor, always making everyone laugh. He was the dancer. If they played dance music at a party - he'd be out there - and you'd probably want to join him. Some say that's how he found a wife, dancing at a bar on spring break '98 in Key West.

He was a neat freak. His attention to detail was impeccable. He lived by spreadsheets, calendars, budgets, to do lists and organized the beautiful chaos that was our family. He never liked writing, so I only have a few sappy cards ... which is why I will cherish every note, every card or anything else he scribbled in that crazy messy lefty handwriting.

He was an athlete. He could have swam circles around Michael Phelps (ok I may be exaggerating but only a little) because he was a beautiful swimmer whose butterfly stroke stopped people in their barefoot tracks on the pool deck. His relay record set in 1990 at Beechwood Swim Club here still stands unbroken today. He loved being outdoors - on the farm, in the woods, driving a boat around the lake. He hiked the summit of a mountain in Denver a few years back and even though he was winded as hell, it was just one more amazing thing he could do. 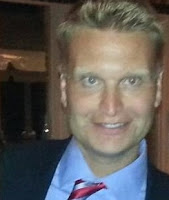 He was a co-worker who loved the people he worked with. He was financially brilliant, and took pride in the way he built up and expanded his family's business, but yet he always rewarded his employees and treated his co-workers like family. He gave so much of his time and money to charity, but nobody would have ever known that because he never called attention to it. He was humble as hell.

He was a brother who fiercely loved his sisters. He stood up for them, sang their praises and laughed at inside jokes with them more than any human should probably laugh. He was a doting uncle to 20 nieces and nephews - several his godchildren. Some of my sisters' children were good "practice" for four babies of his own someday.

He was a son who lived by his father's advice and approval and cherished his mother - whose kidney saved his life in 1995. No one meant more to him than them.

He was a friend who never gave up. He was a champion when you were down. He tried to have something positive to say when others didn't. He had a solution for every problem. If he didn't know an answer, he'd go searching for one. Even if it meant being dragged to several different marriage counselors.

He was an amazing father. He was scared of children the first few years of our marriage - I had to finally push him off the edge into parenthood about 10 years ago. But he did a fucking swan dive into it. He loved our children. He adored them. He changed diapers. He helped me feed twins at 2 a.m. those nights when I didn't have it in me. He clapped at potty training successes, he cheered at their sporting events all the times he could be there. He sang Itsy Bitsy Spider and scratched their backs before they fell asleep. He laughed when he could and told them he loved them as much as he could when he was able to talk.

He was the person I never could have dreamed would become mine - someone too good for me, a person to this day I don't know how could have fallen for me. He is the beautifully funny, smart, talented guy I promised 'til death do us part.' I just wish I would have known how excruciating that part would be.

He was Matthew Robert Remke, and he was the amazing person I got to call my husband and father to my kids.