On the first day of winter, a death in the family

I used to get annoyed when people would compare the grief in the death of their pets to the grief I felt after my husband Matthew died. I thought, "how stupid to think they feel pain anywhere close to what I am feeling." A lot of widows will tell you the same sentiments, because we ALL hear the same thing from people. The same comparisons no matter how far along we all are on the grief journey. I know I had even written something to the effect of "don't ever compare your pet or your grandma's death to the death of a spouse."

But I'm here to say today that my views on this have been slightly altered.

Last night my daughter Payton's guinea pig was acting weird and lethargic. We don't know what happened to him because he was fine only a day ago. She asked me if I could put the cage in her room and he could sleep near her, and I said no. I didn't want him to bother her at night if he rustled around. We turned out the light and hoped he'd be better in the morning when I'd call the vet. 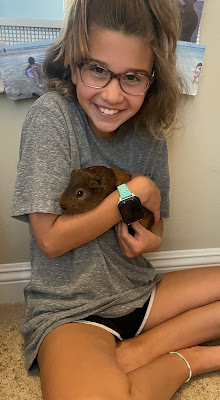 I woke up to Payton uncontrollably crying in the hallway and I ran out of my bed to hear her scream that Bugsy was cold and dead in his cage. My heart hit the floor along with my knees and I cried with her. I was so sorry for her. I could feel her pain and it f-ing hurt like crazy. Something she loved so much and cared for was gone in an instant. No reason. No goodbye. No time to process. A gut punch and a dagger to the heart. I remember the feeling. I am no stranger to that one.

Bugsy, this little rodent creature, was very much part of our crazy little family. He was a pet that she begged for the past several years. I didn't want a 'rat' in the house and the answer was no for a very long time. But this past summer, for her 10th birthday, I finally caved and got her one (and soon after even got one more as a buddy for him) because the sheer delight in her eyes at the thought of having her very own first pet to love and care for was too much for me to deny. Bugsy was a source of much happiness for a little girl and her siblings —albeit even if it was a short time. Even I wanted to hold him and pet his soft little fur and laughed at him running in circles in the grass or munching on lemon tree leaves. Even her teenage brother (would never admit it though) that he too, liked holding this sweet little creature.

We spent most the entire morning holding and crying over a dead guinea pig. We touched his little creature paws —something we could never quite do when he was alive because he scurried away. We petted his soft little chin, something he rarely let you do. We cut a little piece of his hair, where he had a sweet little white fur spot in a coat of brown fur. We said we were sorry for not doing anything to save him and I felt tangible heaviness in the guilt of not letting her sleep next to her beloved pet on his last night here. We took pictures of him because we wanted to remember one last time what this sweet little creature looked like. I told Payton that her daddy would hold him in heaven, I hope. 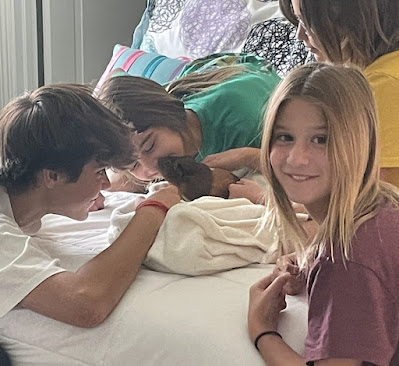 Payton's sister penned a sweet goodbye poem and planned a funeral in our back yard, where she showed us a Bugsy slideshow near a shallow hole in the ground. We wrapped Bugsy in a towel and buried him with lavender leaves and covered him with dirt and pretty red bougainvillea leaves. We dropped tears ontop of him and I cried for a little creature that I didn't want to die. Our eyes are puffy today and we likely will continue to mourn sweet Bugsy long after this day is done. I told the kids yet again, we cry and hurt in life because we love so well. Life is about hellos and goodbyes. And the latter ones f-ing hurt.

It doesn't matter what or who we've lost. Anything we have loved and lost is worthy of recognizing and your grief in it isn't comparable to anything or anyone else's because it's yours. Sadness in grief is just that. For whomever, for whatever. Losing something or someone you really loved just HURTS. 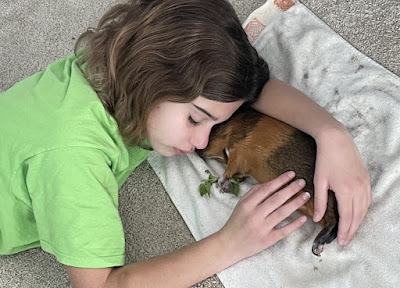 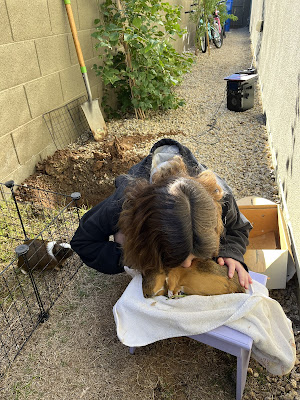