Four years doesn't seem like a lot of time. It's the time it took to get through high school. The time in which I managed to graduate from college. It's the length of a really high-priced car lease I was swindled into signing back in 1999. It's about the time that lapsed between my wedding day and the day I had my firstborn. And today, it's also the span of time that's elapsed since my husband Matthew died on Nov. 19, 2017. It doesn't seem like a lot of time but then again can seem like ages when month after month, year after year you've measured time in the milestones and life happenings that he's missed. November is a heavy month. Because no matter how far I move away from that familiar "feeling of November" it will always be stuck in my head, even as I sit here in the warm Arizona desert. That smell of wet leaves. The biting cold air. The once colorful landscape that turned brown and grey and dreary. All reminders to me of a time when the world stopped for us.

Four years later, I know better than to linger too long in a moment or memory of him. Because that grief can paralyze you in the most unsuspecting places like the grocery or at a soccer game. We are doing our best at finding happy even despite the state of a crumbling world around us. There are still jokes to laugh at. Places to see and things to do. Celebrations to enjoy. Last night the kids and I made "Thanksgiving dinner" a week early with turkey, sweet potato and green bean casserole and dinner rolls. Because that was Matthew's favorite holiday and his favorite things to eat this time of year. Tonight my son and I are headed downtown to the Phoenix Suns basketball game. We're going to watch in person—ironically from Row 19 of section 119– our favorite player Devin Booker continue the team's winning streak. I refuse to make the 19th sad. Because four years ago it was sad.

I still get triggered. Sometimes it's country music or the theme song for The Office. Or the smell of lake water. Mostly though, it's pictures.

I came across a 2015 snapshot of the twins hugging. They are wearing new Easter dresses I had just bought that they wanted to try on. We were packing that night for a family trip to Florida for spring break. They are pictured standing embracing in the exact spot on my bedroom carpet where I found my husband dead on the floor four years ago today. The spot of carpet where I knelt over him screaming to God, praying this was all a nightmare. The carpet I asked his best friend to rip out and take away that next day, when he asked me, "what can I do to help you?" Even four years out, triggers like that one won't and can't be ignored. You brave it, feel it, cry about it, write about it maybe. Then you survive it. And keep going.

My 9-year-old said she started to cry in class yesterday and she didn't know why. She had asked me earlier in the week what the day was when daddy died. She said a friend hugged her and she felt better and proceeded to talk about boys. One of the twins told me there's a girl on the soccer team who "acts bratty to her dad" who is on the sidelines. She heard the girl tell him, "I don't even want you here!" which made my daughter sad because she knows how precious it is to still have a father. I told her she has gained life insight at age 11 that many people don't get till they are old. Then my daughter kicked the shit out of that soccer ball and tied the score up. My son doesn't talk much but I know he loves hearing stories of his dad, no matter how melancholy it might make him. But he can still turn around and laugh at the fact that at age 14 he has already outgrown his father's Cincinnati Bengals pajama pants.

Four years after Nov. 19, 2017, the grief surrounding his loss is still able to grab hold of us in little ways. But we never let it strangle us.

There's a houseplant that sits in the corner of my living room. After Matthew died, it was one of the many flower arrangements and plants that were transported home with us after his funeral. The funeral home flowers of course all wilted within weeks followed by all the plants. But not this one. I don't know what it's called or who gave it to us but this plant came with a pink butterfly ornament stuck in the center. The leaves are frayed and the edges get brown and wilty sometimes but it always perks back up. This plant can't be killed it seems. I am surprised it didn't die even when I forgot to water it and neglected it in a dark corner of my office for a long while. After four years, three different homes and over 1,800 miles, this plant has stayed alive.

It must've been the only damn plant paying attention. Because that's what we do here. We wilt and get sad and feel down some days. But we always find a way back up. Four years in. Still standing. Still surviving. 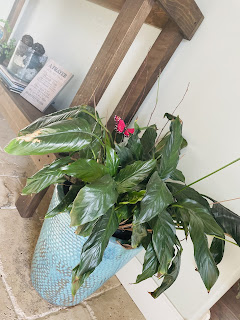