Rebirth: One year after moving to the desert

Today marks one year for us in Arizona —one year ago the kids and I landed in the desert after hitching a one-way flight out of the Midwest. We left a place I called home for over 20 years and the only home my children ever knew. We packed up and left in the midst of a global pandemic —during the hottest summer ever recorded for the city of Phoenix, our new home. It's really feeling like home too—we've successfully joined the Diamondbacks, Cardinals and Suns' bandwagons, we host pool parties with friends and we all think 72 degrees is pretty damn chilly.

But to say I was initially scared about this adventure I was taking us all on last June is a big fat understatement. Because it transpired quickly. I've been known to make pretty spontaneous decisions in my life. But this was the biggest one. I like to think I had my shit together when I pulled the trigger on this move. I suppose we'll never really know because there are many days I’m still scared as hell. Days that I am thinking, "what the hell did I do?" I often wonder how I'm surviving motherhood and life solo especially when I crave people, interaction, togetherness, a partner to balance me in the chaos. I feel like someone's eventually going to figure me out. I'm seriously not capable of all this adulting and parenting alone. I just knew I didn't want to feel the pain anymore of being in a place where everything reminded me of my late husband. I didn't want to shovel snow or deal with grey days anymore. I didn't want pandemic lockdowns and rules to confine and keep me somewhere I wasn't happy. I wanted a fresh start —not as a widow, but as ME. I wanted to be able to see where a new love might take me. (So far it's taken me to therapy, LOL).

But this past year has also given me so many days I wake up happy (despite the a-hole woodpecker who has taken up residence on my chimney every morning at 5:30 a.m.) I still feel lucky that I get to be here. I get to live in this beautiful place with my four healthy children. We get to explore so much. To see things we never would have seen if we were somewhere else. I have a mountain range out my balcony window and cactuses (cacti? damn, I still don't know) right in our front yard. We've been scorpion hunting with blacklights on the pool deck. We’ve screamed bloody murder at the sight of wild pig creatures called 'javelina' that sometimes roam the neighborhood at night. We’ve tried cooking things on 115-degree cement (unsuccessfully). We’ve braved new schools and teachers and made new friends. We’ve hiked some pretty steep hills and even stared down the biggest, most breathtaking canyon on the earth. I've got it pretty good.

After Matthew died nearly four years ago, I was far from good. I remember laying in a guest room bed (because being in our bedroom was too painful) wallowing in a pit of sadness so deep I feared I’d never get out. I felt like I died— at least a piece of me did. How was life ever going to be ok again? How was I going to wake up one day and not feel physical pain when I thought about my dead husband and what my children and I had lost? How could I ever function normally again? The person I was before he died was gone.

I recently saw a picture of this mythical phoenix bird —which is associated with cyclical regeneration, or rebirth. "The phoenix obtains new life by arising from the ashes of its predecessor. It dies and decomposes... before being born again."

I have often worried over the past year, if this is where I’m supposed to be. Was this the journey that I was supposed to take? The one that uproots the kids and me from everything we knew only to plunk down in a strange place to start again? Was I supposed to stick it out and stay like so many people often do "for the sake of the kids?" Or was this always the plan?

Feeling the warm 100-degree evening wind on me tonight, exactly one year after our arrival, I know, yes. I was always meant to start again here, to find new adventures, especially big ones. To keep bettering myself, even if I have to be alone. Despite my constant failings, I remain hopeful for a great transformation. I look forward to seeing who comes out of the ashes. I'm starting to like her. She feels like home. 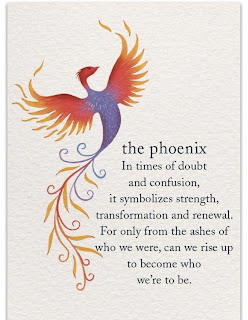