In 2010 when I was a new mom of twin girls and a 3-year-old little boy, it was quite a spectacle whenever I had to pack them all up in the car. Two babies in heavy car seats, a preschooler, a double stroller and sometimes the dog too —we were a circus. But I was adamant about not joining the minivan mom ranks back then. So my late husband Matthew bought me a new Land Rover SUV to haul around all those kids and crap and look good doing it.

But I had a short run with it since I unexpectedly got pregnant two years later and the minivan pressures were just too much. I got the damn minivan and Matthew got the Land Rover. I kept telling him once our kids were out of car seats someday I was taking it back.

“It’s just a car,” he said. But we both knew he was getting the better end of this deal. He loved that car, too. He always kept the inside clean, got it washed all the time and never let me eat in it (spoiler: I ate in it). I laugh thinking about the times I swapped cars with him so I could drive it again. I was probably driving too fast on the interstate (lots of speeding tickets in there) and a few times I merely just parked it places where the sides got keyed by assholes (three separate instances y’all!) I remember the times I drove it to the farm for campouts, but didn’t really want to sleep in a tent outside so I slept on blankets in the back seat instead… the times we towed the boat to the lake to spend a weekend laughing with friends—or all the times I let the kids eat Graeter’s ice cream cones in the back with the hatch open. Many trips with kids and their friends all packed in the back, singing Justin Bieber songs out the windows and sometimes hanging out the sunroof. So many memories, each with their own story about how life used to be for us.

A little over 10 years have passed. Our babies (who turned into toddlers then preschoolers then adolescents) have all been carted around in this car. The floor mats are stained from food that was never supposed to be eaten in there. The leather seats scratched and covered with dog hair from a dog that really wasn’t supposed to be in there because she would shed too much. It’s a car that has a couple broken latches here and there and needs new brakes, new suspension, a new transfer something, new tires and a laundry list of other things, they told me a month ago. Things that would cost more to fix than it’s worth.

But its worth to me became something so much more than just a few thousand dollars. It was yet another piece of the puzzle of time and memories I had with Matthew. It wasn’t just a car. It was a chapter of life. It was a vehicle to feelings I could only arrive at when sitting in that driver’s seat. It was another connection to him that could reach me only through the memory of him in that car.

I went with my friend Chris to a dealership this weekend (I imagine Matthew being grateful for this if only for the fact that he was very aware of how I should never walk into a car dealership alone — let’s just say I never saw that $350/month 5-year lease on a Suzuki coming back in 1999)... and I bought a new car for the first time in a long time. I signed papers to trade in Matthew’s car for a brand new one. And I sat there trying to be excited about this spotless new SUV I was getting at a hell of a deal—one that fits four messy kids and a dog and gets great gas mileage and doesn’t have any scratches, stains or screechy brakes. It was a Saturday night and the service people had left, so they didn’t let me drive it away that night since they still had to detail it and have the windows tinted, so they said they’d deliver it to me Monday.
So today I cleaned out my car. Matthew’s car. I got all the coloring books and broken pencils out of the back seat pockets. I vacuumed the dog hair as best I could. I unearthed a French fry from under the passenger seat that could have been two years old. I found CDs I thought I lost. I found Matthew’s old AAA card in the glovebox. I washed the exterior and cleaned the windows like Matthew always did. I tried not to cry thinking about watching a stranger from a dealership come and drive off with ten years and 118,973 miles worth of my memories like it was nothing.

And the new car came, and it’s great. It’s got bells and whistles and smells so new and it tells me automatically when I turn it off to check my backseat for kids so I don’t leave them in the car and fry them to death in the Arizona heat. I’m fortunate to have ‘things’ in life and I don’t take that for granted. I’m lucky to be able to have this, I know. But I lost so much in that trade it seems.

I watched as Hector the Stranger from the Dealership drove out of my driveway with Matthew’s car. The kids and I waved bye. Another chapter closed. No tears. Deep breath. “It’s just a car,” I lied to myself. 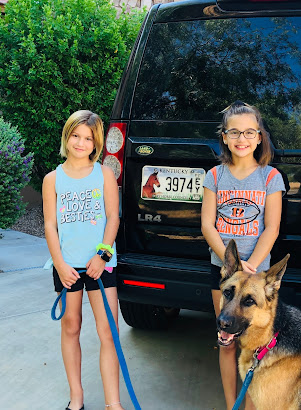