Birthdays and fish funerals all in a day

It's the twins' birthday today. I swear when they put those two scrinchy-faced babies in my arms that late December day in 2009 I never thought time would fly so fast and they'd go and turn 10 on me in a blink. But they did. Diapers, late-night feedings, toys and bottles, tantrums, walking, talking, sassing, tears, giggles, stitches and staples, antibiotics, vaccinations and band-aids, first days, last days, in between days. Happy times, sad times, heartbreaking times.

We've come a long way in 10 years but life is still fun, exciting, magical and brilliant because of them. They are LIFE.

I got sucked into old videos and pictures on the computer tonight. I remember the medicinal smell of the O.R. at the hospital where I gave birth to them. I remember the nurses throwing scrubs at Matthew, telling him to hurry because they were coming fast. I recall the sheer amazement on his face at holding two little girls in his arms. I'll never forget his smitten look. He was so excited for life with them. I remember how they left me alone in the room with them hours after they came out and I just said, "happy birthday girls." I was so scared. I didn't know if I could be the mom of girls. 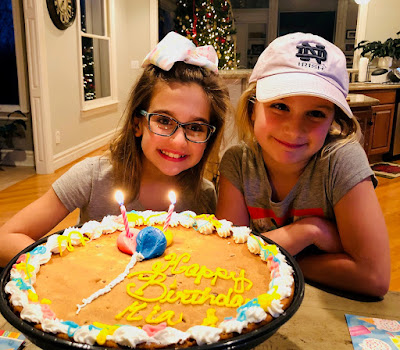 This morning I woke up and kissed them and told them "happy birthday." I had a fun 'nail polish and makeup' party with their friends planned but first we were going to eat donuts for breakfast and bake cupcakes together. I went to the laundry room to feed the dog and screamed. They all came running to see all three of their pet goldfish dead. The festival goldfish they brought home after winning this past summer. We were so proud (me really, I was proud) at keeping them alive so long. I had killed them. Because last night in a flurry of running around, hanging streamers, blowing up balloons, vacuuming and doing laundry, I decided to clean out their fish bowl and I put them in a small cup of water just for a bit until I changed the new water out. But as life goes, I got side tracked and long story short— I went to bed and forgot to put them back in their bowl. So the girls got three dead fish for their birthday.

"I can't believe you killed my fish on my birthday, mom," one of them told me.
"I can," the other one said.

So we had a fish funeral before a birthday party today. We said goodbye and sorry (mostly me) and told them to be happy in whatever Heaven fish get to be in. There was some whimpering and a couple tears (mostly me) and we came back inside. It's almost like this kind of thing is supposed to happen to us. Like, why WOULDN'T we be standing out in the rain burying three dead fish in the mulch bed on a Sunday morning, right? It's so very … us.
But we still had smiles today. We still laughed today. We ate cake and blew out candles. The girls put on makeup and fought over pink or purple sprinkles on their ice cream. We still celebrated today.

Because that's what life is all about— birth and death, ups and downs, happy and sad, shit happens, good happens. It goes fast. It sometimes drags. You are scared most days. But that is LIFE. They are life. And after 10 years I'm just excited to still be in it with them. 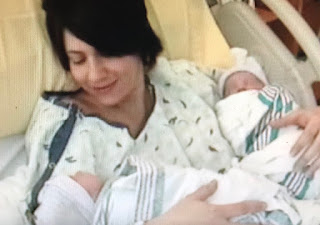