My late husband Matthew had a lot of friends. He was the kind of person who didn't really make enemies, so it's no wonder it seemed an entire town full of friends packed the funeral home and even lined up along the street for hours in his honor nearly three years ago. But throughout his life he was closest to two guys who became his best friends—in thick and thin, over long distance or up the street, through different stages and experiences, in relationships, jobs (or no jobs), kids (or no kids), life challenges—all the way up to the day they both flanked his casket and lowered him into the ground. Adam and Chris Z were as close to Matthew as blood brothers ever could have been.
Eighteen years ago this month when we got married, I'll admit I was slightly annoyed when Matthew said he wanted two best men. Neither he nor I had brothers so he had to choose among friends.
"You have to pick one," I told him. "I can't choose one over the other," he said.
And so we had two best men.
Over the years those guys pretty much became part of our household. Always around, always there. Having dinner with us, crashing our couch for movie night, having drinks with us. Throwing football with our son, giving piggyback rides to the girls. Fixing a grill (or more likely, toilets). Fixing lawn mowers and weed eaters. Helping hang curtain rods or building shelving units. They knew Matthew better than me, and probably knew me better than me for that matter. Aside from my husband, Adam was the first and only other person who put his hand on my belly and felt the first kicks of our son in utero. "That's a soccer player in there," he ironically predicted. There was nothing these guys wouldn't have done for him or for me and our kids, even after his passing. Shortly after Matthew's death, both were at my side, as if an extension of me now—the "best friend ownership" had seemingly been transferred. Chris Z asking what I needed done, then ripping the blood-stained carpet from my bedroom floor because I couldn't look at it another minute... Adam spending moments with my kids telling them how great their dad was.

Going through pictures of past wedding anniversaries, I found the ones from our trip to Florida five years ago in 2015. We often went to Florida every October to escape chilly fall weather and drink daquiris by the sea. In the early years of marriage, we’d get a high-rise condo with a view, lounge in the sun all day, sleep in and drink too much. In the later years, when we'd bring kids, we'd get a first-floor condo with the easiest walkout to the beach so that hauling four kids, a wagon full of beach toys, coolers and what was left of our patience didn't kill us both. That year we brought Adam with us. Adam, the eternal bachelor and resident jester because he always made us laugh, even when the laugh was at his expense. Some people thought it was weird we brought another dude on our anniversary trip. But to us, it was like we just brought our right arm. He was someone we just needed —for fun, yes— but also probably to hold us together. Matthew was never in a bad mood around Adam. Or Chris Z. And it was probably one of those years when we needed him there.
Going through those pictures, I realized that in the three years since Matthew's death, I have been so wrapped up in my own grief that maybe I failed to remember the grief of his closest friends. Because while Chris Z and Adam are still alive and well, they lost their best friend. They lost a huge chunk of their hearts, too. Just because I ache from the loss of my spouse doesn't mean their hurt in losing their best friend is any less profound for them. I see that their pain is just as legitimate and heartbreaking for them as mine is for me. And not just Chris Z and Adam, but all of Matthew's dearest friends who laughed with him, shared times with him and over the years cherished his friendship.
When people die, we give all our attention to the family of that person—as we rightly should, of course. But I think we should remember to shower love and acknowledgment to their friends too. Because no grief in loss should be quantified or discounted —especially if the griever isn't blood related. Some of the greatest connections we make here in life are with those who aren't technically family. Sadness and emptiness can consume a best friend just as much as it could a widow.
Tonight my heart is with all those out there who have lost a best friend—blood related or not. Your heartache is valid. I see you, I feel you. I acknowledge your hurt. 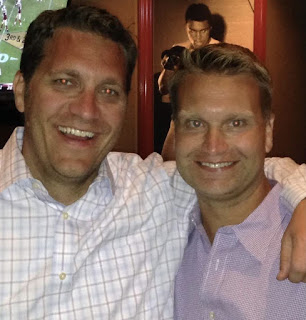