The symbolic butterfly and me

So, lately I've been talking to butterflies. And birds. Sometimes maybe a praying mantis or two, I won't lie.

Let me just say that most people who have lost a loved one cannot deny they have looked for signs that might tell them the whereabouts of the loved one who is gone. We scrutinize cardinals that fly into our front yard trees. We stop and stare at butterflies. We study ladybugs who happen to appear on the windowsills. Any tiny inkling that our loved one is near or watching over us, you bet your ass we're going to look for it. It might seem ridiculous—looking at birds in the yard —seeing them as anything more than a damn bird looking for a worm out here.

For me, as I near two years since the death of my husband, I'm always looking. You see, I never got a goodbye. I woke up one Sunday morning in November and he was gone. I will forever regret that I never got a chance to say goodbye.

So after my late husband's death, the kids and I moved to a new house, closer to school friends and more playmates than we can count. In the year and a half we've been here we've seen a beautiful red cardinal flying around in the trees surrounding our house so much that you'd think I was fertilizing the yard with cardinal birdseed or something. The kids gasp "LOOK, there he is!" when it perches on the deck just outside the window while we eat dinner. "Daddy's checking on us," they'll say to me. I nod and smile, sometimes with tears in my eyes, because I believe it too. 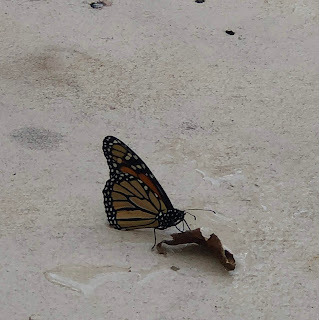 Then we have the butterflies. Last fall, at one of my son Brayden's last soccer tournament games of the season, I wore sunglasses despite the clouds to hide tears because his daddy wasn't there to see his goalkeeper son play. He'll never be here to cheer him on again. Then I felt like he wanted to prove me wrong. Because during that game, a butterfly started to fly around him in the goal. It was just hovering around him —almost pestering him. I looked around, pointing, "Does anyone else see that butterfly!?"

This summer when I took Brayden on a lake trip with his buddies they all went cliff diving off the rocks into the water below. Watching and filming his jump on my phone, I watched a yellow butterfly float around my son as he climbed up to the top and it stayed there and flitted around him for a while until he jumped. "Look at that butterfly hovering around Brayden!," I yelled to everyone on the boat.

Sometimes it's hard being at the grocery store. No amount of time as a widow will ever erase the fact that I was a grocer's wife and my husband lived and breathed and loved those stores. So being in there some days is like a little gut punch. Today I walked out of the grocery store defeated, missing him—then I got in the car and closed the door. A little brown butterfly was flying around the console and flitting against the closed windows. "How the hell did you get in here," I said, apparently to what I now believe is my husband. I laughed at myself for thinking a butterfly was a dead man and I opened the window to let him out.

Then tonight after fixing and cleaning up dinner, after homework and breaking up fights, I was sitting on the pool deck for the only five minutes I had alone before I commenced my taxi service to gymnastics and soccer practice. Another mundane, exhausting day without him in the books, I thought. And then a monarch butterfly almost divebombed my head and flew up and down the pool deck, flitting around me in circles, skirting the top of the water and landing not far from my feet. He just sat there, pulsing his beautiful wings —for what seemed hours but was probably only a minute. "You again?" I said to him. "God I miss you," I whispered ...to a damn butterfly. I had been thinking all morning if I've been talking enough about daddy to the kids. Do I tell them enough stories? Do they want to hear me tell them daddy's jokes or funny stories?
I kept staring at this butterfly, for what, I think? An answer? This is ridiculous.

"... just keep checking in on us ok?" I finally hear myself say.

Because that's what our loved ones do when they're gone, I think. They check in on us. Or at least we like to think they do. We get these seemingly ridiculous signs that tell us our loved one is ok. We look like crazy people talking to birds and insects and especially to butterflies on the pool deck.

We're looking for just that slightest hint of a sign of our person. We're forever looking for "I'm here."