What he would have told the 'new guy'

A friend of mine told me the other day to "quit writing sad stuff." And because he's a friend and I love and value his opinion, I'm going to try and take his advice. So, this is my attempt at some 'happy shit.'


Something recently popped up on my Facebook feed from a widow support group – an open letter, "To the future man who will date my wife" – written by a widow from the perspective of her deceased spouse. Sounds depressing right? At first it made me kind of sad. For example:


"She has an infinite capacity to love you with her whole heart and soul the way she loved me. I can promise you that to be loved by her... is heaven."… "I know that at times it will be extremely challenging to love my wife. It is hard for anyone who is dating or married to a widow... it comes with its own unique challenges."

Ok, the sentiments above are very beautiful and heartfelt, but I actually started to giggle halfway through the article. I laughed out loud thinking about how this bleeding heart tribute "from husband to new guy" regarding his wife was absolutely nowhere close to what my late husband Matthew would have ever said to any "future man" who had the balls... errr guts... to take on dating HIS wife.


And since I'm pretty knowledgeable about who my husband was and the relationship we had, I'm going to tell you straight up what a letter from my own husband would have said. It likely wouldn't have any foul language in it, because unlike me, he rarely said a swear word – he was pretty PG. I'm thinking the following admission is probably going to clear my social calendar out and scare anyone away from me for at least a good year, too.


Let me start out with where I almost spit out my oatmeal.


"I can promise you that to be loved by her is heaven."


LOL. That one is sweet, and likely true about many a wife out there. But nope. My husband's letter would have gone something like this, "Dude, being loved by Andrea might be heavenly for a bit, but if you piss her off, she will suck your will to live with one glance of her soulless, black eyes." (He used to say my dark brown eyes looked black when I was mad.)


He'd probably go on, "She is amazing at backrubs and at other things (in that department), but Lord almighty, if you make the slightest comment about that second piece of Cheesecake Factory dessert she's devouring, you may as well get comfortable with celibacy for a few months. You won't be getting any love from her then, my friend."


He probably would have definitely said, "To be loved by her is LOUD, friend. Get earplugs. She lives, laughs and breathes all loudly. She doesn't know when to close her mouth. She swears like Andrew Dice Clay. She has no tact. She will threaten grade school basketball (and soccer) referees with bloodshed if she's slightly annoyed."


He wouldn't be wrong in that admission– I have an intense love for my children and their sports endeavors and sometimes I get just a little too excited about them. And sometimes I use a lot of ...'sentence enhancers' to show that excitement.


Again, more chuckles when I try to envision Matthew saying, "...it will be extremely challenging to love my wife."


Lord of all things, if I know one thing, his letter instead would have read, "GOOD GOD MAN, RUN! Run while you still have time!"


My husband used to joke, "most women are a little crazy, it is just a matter of to what degree." He wasn't misogynistic by any means – don't get me wrong. But he'd not be stretching the truth to have said that I am pretty loco. Sometimes I'm over the top. Sometimes I overreact. I jump to conclusions. I let anxiety and paranoia get the best of me. I'm working on it all though, and is one of the reasons why I write.


But to tell some guy that I was "challenging"... well, that would be an understatement. I am stubborn as hell and I don't like to admit fault. It was the biggest bone of contention in our marriage for sure. How many times did I go to bed mad because something he said hurt my feelings or ticked me off, when I was probably the one who instigated in the first place? A lot. I was no good at "I'm sorry" either, so that was just fuel on the fire of unforgiven things we shoved under the rug for years.


I can just hear his heart-to-heart with a fictitious future guy, "Do not ignore her if she says, 'she's fine' and she's eating Nutella with a spoon from the jar. She wants your attention! Or quite possibly she just wants you to tell her she has the ass and pout of Victoria's Secret model Adriana Lima. So no matter the chocolate shirt stains she's rockin,' just tell her!"


He'd be right. Just let me have the dessert. Matthew always knew that chocolate cheesecake cheered me up and he would drive 30 minutes to go get it for me if that's what it took on any given day.


Oh holy hell, my husband probably would have been laughing through tears at that one. He hated having a "feelings" talk. But so did I, which meant both of us spent an entire marriage not communicating our feelings all that well. And when I did get into any emotional talks, he probably would have rather been at one of his kidney biopsies.


I'm thinking he would have warned the new guy, "Ride out the 'feelings' talk as best you can, because if she stays in a good mood tonight, she might make you a shake and sit on the couch watching the game with her ice cold feet and butt next to you. Yes, her butt's as cold as a polar bear's and her toes are consistently the temperature of the Arctic Ocean... but man she makes a mean Oreo mint shake, she loves sports on tv and she is a good cuddler."


"You also get the benefits of a spouse who knows how to love someone, how to build a life together and endure unimaginable pain and come through it a new and stronger human being."


Maybe my husband might have been in agreement with the author on this one. He might have said, "While she wasn't the best at showing love, it didn't change the fact that she did love me."

As for the unimaginable pain of seeing him sick and dying and realizing the soul crushing truth that the father of my children was gone– well, there was no other choice for me than to emerge a "stronger human being." Was there really any other option?


"She's more beautiful, compassionate and resilient. ...She is an amazing woman. Any man who has the opportunity to love her is a blessed man."


Now this, I don't know about yet. I don't know what Matthew would have said about that one. He used to tell me I was beautiful. He even said it through laughter when I tried to squeeze into Spanx on my 35th birthday or went through that unfortunate acne phase after our son was born– I definitely didn't always feel beautiful. I wasn't always compassionate either. One night early in our marriage, he was out drinking without me and came home drunk and fell halfway down a flight of stairs. After realizing he was ok, I admit I laughed a bit and told him "it served him right." He always used to joke to our friends that I left him too long at the bottom of those stairs.


I don't know if he would have said I'm amazing. I hold out hope that I can show him I'm at least trying. I'm mustering energy and faith in myself to keep getting up and carrying on every day for the kids. I hope I can say someday he would have said those words about me.


He may not have said any man would be "blessed" to have me, because I'll be honest, that's a little too pious a description to use in a sentence about me. But I know with absolute certainty he would have told him that life with me won't ever be dull. We had a lot of fun over the years. And that truth doesn't make me sad. It makes me happy as shit. 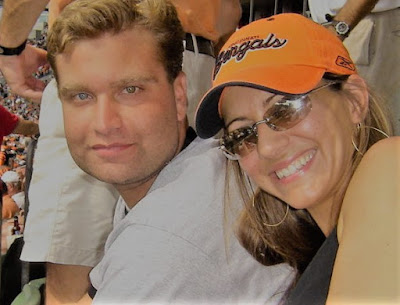