The monster that is DATING after becoming a widow

They say, "When one door closes, another one opens up."

I suppose that can be true... unless the old door can't close all the way because your foot is stuck in it.  Your foot—a piece of you—is still holding onto something in there.

This is how I liken the monster that is "dating after becoming a widow."

I've been alone now for about a year and I'm getting used to this being 'normal' now. There have been a lot of low days in there. Days I've felt so alone, that despite having people around, kids around, friends around, I have felt utter and complete loneliness. Scary lonely. It's the hardest at night. When the kids are in bed and it's painfully quiet. I don't sleep that well, and that's where my thoughts catch up to me. It's when I think about how this used to be my favorite part of the day, when the kids fell asleep and he and I would hop into bed and watch TV together. I'd grab the remote from him because he would watch Cops all night if I let him. I just wanted HGTV on. Other times we'd laugh at reruns of Modern Family or old episodes of The Office. He'd hold my hand. He'd reach for me the way most women long to be reached for. Even though I was always tired, I was never too tired for him.

I don't watch those shows much anymore because of the reminders of that happiness. Maybe I should get used to being alone, I tell myself. Maybe that was as good as it'll ever be. Nobody has all that much interest in a 40-something widow with four kids and a lower abdominal scar. I don't want to think like that, but I do. I don't want to envision myself alone and celibate until I die, but I do. I hate that I can't watch romantic comedies or love scenes from movies because of the bitterness and tears they cause, but I can't watch them anymore. I can't close the door some days it seems.

A while back, when my husband was getting sicker and things started to get grim, he sat me down on the couch. It was before his second surgery to rid the cancer from his tongue and before the loss of much of his speech. He told me someday I was probably going to find love again. He said I would probably marry again. He wrote much of the same thing in an email to me several months before he died, a time when he was readying his will and the estate for what he knew was inevitable. I remember how mad I got. I told him to quit saying this shit to me. Quit giving up, quit telling me things I didn't want to believe. Things I didn't want to think could ever be a reality. Because I didn't want to be with anyone else. I didn't want to look at another man with love. I didn't want to have to start all over again with some stranger. We promised each other we'd never have to be "out there" again, remember? You can't leave me here to do this alone.

The wife who sat on the couch with him back then couldn't have fathomed the loneliness. She couldn't have dreamt of the sad nights by herself in bed, the empty bitterness at seeing other couples holding hands. She couldn't know how soul crushing it would be to think of going another 30-40 years with this hole in her heart.

I was talking to a friend of mine who told me she thinks people have many 'loves' in this life. Our hearts —our beings— are designed to love and BE loved, she said. We aren't really meant to be alone. And it's only recently that I am thinking she's right. Without a love or the purpose to love, I believe our soul feels sadness, worthlessness, fear and a void that can devour a person into a dark, black hole of existence. How is that a way to be living the only ONE life we get? Maybe it could be possible to find happiness in more than one heart in a lifetime?

Extroverted people like me aren't that great with being alone. I am a social being. I love being in a crowd, with people, joking with friends, telling stories and hearing them, too. I crave laughter. I feed off of it. Being alone this past year has validated these truths more than ever. I hate solitude. I fear silence. I can't be alone. I don't want to be alone.

I told my friend I'm not out to find another husband. I have one in heaven. I don't need to find another father for my kids. They have one in heaven. But the idea of hanging out with someone, going out for a drink and having a laugh together —is something I painfully long for again. I want that normalcy. I want to feel like I matter to someone —to be someone other than "mom" all day, every day.

But for any widow, putting herself out there again is pretty terrifying—especially when you have conditioned your brain, your heart, your everything to be forever devoted to one person. How could I care for anyone else who isn't him? And if I try, how will I handle the judgments from others who will think I don't love him anymore? How will I deal with knowing someday a good, decent, caring man may feel threatened by the residual love I harbor for a dead man?

To them, I say that nothing could ever change how much I loved my husband. Or the fact I will always love him to the depths of my being. There isn't a day that goes by that I don't think about him or what he left behind. I hope that I will get to a point where I can look at pictures of us and not tear up. I dream my broken heart will mend. But I'm learning the heart is bigger and has more capacity than we know. It's capable of opening up again if given a chance. Why shouldn't I allow someone to show me that happiness here still exists? Why shouldn't my children get to see their mother laugh and smile again?

I know I need to take my foot out of the door. To open another door. Even if it shuts or slams in my face a million times, I need to keep opening doors—I know behind one of them might be laughter again, happiness again, maybe even love and life again.

This blog post was originally published Nov. 6, 2018 here at Living the Second Act. 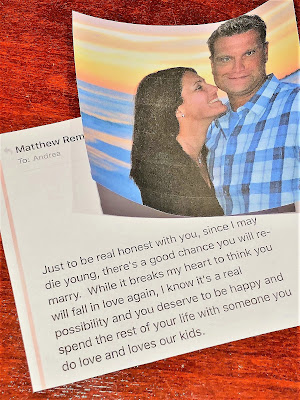