I played fortnite with my son, maybe you can too

I lost my son for a bit.

He doesn't talk much. I know 11-year-olds don't talk all that much anyway but I'm surprised if he says more than a few sentences out loud each day. It’s been eight months since his dad went to heaven. But before he left, he somehow handed down to his son his introverted, quiet demeanor that both intrigued and irked me for the past 20 years. I guess his little sisters do more than enough talking for him these days, but I really don't see or hear from him outside a grumble when I tell him to put his laundry away. This boy does his summer homework, goes to basketball practice and occasionally rides bikes with his buddies, but as every mom of a boy this age can attest, our sons are most likely holed up in the basement playing Fortnite. And it's hard as hell to get him out of there when he's lost in that game.

So I recalled that old saying –the annoying one my mom burned into my brain as a child– "if you can't beat 'em, join 'em."

So I joined him. I asked my son if I could play Fortnite with him. You would have thought I just told him he could pack up and go live at Dave & Busters forever and eat Twizzlers for every meal. I never knew such excitement still existed in a boy whose life has been a whole lot of grim lately.

I hadn’t touched a video game since I played Nintendo Super Mario Brothers in my next door neighbor‘s basement in 1989– so this was going to be quite comical, I thought. My son definitely agreed. 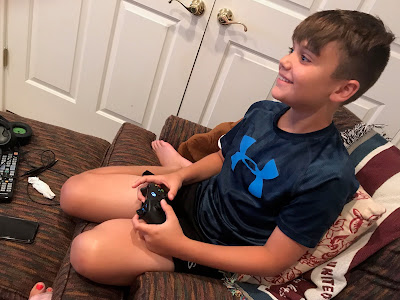 For the next hour, I jumped out of a flying bus thing (or what looked like a bus) onto several different terrains– because, of course, I got killed many times right off the bat. I ran through bushes and alongside mountains. My son showed me how to bust through cabin doors and showed me how to get what was inside the treasure chests. He told me all about the tricks in each world– Lucky Landing, Anarchy Acres, Tilted –and he tried to give me the best way to stay alive and ultimately win. I screamed at a scary guy dressed in a black suit that I was told, "never gets killed, mom."

I was completely focused on staying inside the 'circle' thing before the 'storm eye 'thing caught me. I was dizzy trying to get turned around because I didn't know which buttons controlled what. I never knew how to acquire any guns or new ammo and I would somehow get stuck in a corner just whacking a wall. My son found my skills amusing every time I went the wrong way and he laughed his hardest when a gamer called Speckled Sauce killed me from behind. "Well, that wasn't very nice of him," I said, enjoying my son's laughter.

I can see how these boys are tuning their moms out, as we yell from upstairs to turn it off. Because I wouldn't have noticed if an intruder was burglarizing my house that night and stealing away with everything but my kitchen sink. I was taking in a moment. A moment of happiness with a boy I'm so in love with but I can't tell him that, because it would shut him down. He laughed with his momma and joked how terrible I was with the controller. He'd grab the controller and help me stay alive. He talked more in a span of 58 minutes than he has in his entire life it seemed. He was happy (and I was happy because he told me I came in 11th place out of about 50 people, so I'm definitely winning at the Fortnite thing).

I got caught up in a moment of happiness with a boy –who is and forever will be– that beautiful baby boy that his daddy and I brought into this world to love and protect at all cost. Sometimes it means you jump out of a bus thingy. Sometimes you run through bushes or alongside a mountain. And you run into walls. Sometimes you face scary guys, too. Sometimes you have help, but other times you are left to it on your own.

Moms know we will go to any lengths, to any world, to find our lost child. To find and give happiness to our children. That's the win. 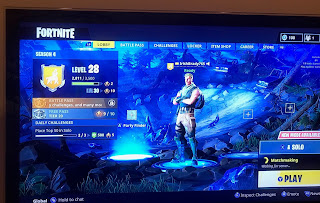