Wrapped up in Daddy

My son hasn't said much or talked much since his father's death a couple months ago. The counselor said he's at the age where he will be closed off. He may be angry or cranky at times, likely for no reason. He is old enough to understand this heartbreak, but doesn't know quite how to process it. He's also a pre-teen, which means these would all be normal characteristics that I'd be getting used to anyway. But I don't like when he doesn't laugh. I don't like when he doesn't smile. I don't like that he doesn't talk or ask questions about his dad.

The girls talk about daddy all the time. One of the twins is certain that he sits next to us at mealtimes. She insists on giving me one extra hug and kiss each night, telling me, "that one is for daddy." My little one draws daily pictures of her daddy as an angel, and even wrote him a thank you note for coming to his funeral (I'm doing a kickass job at raising polite people over here). She told me the other day, "I really want a daddy," to which I didn't have an answer. 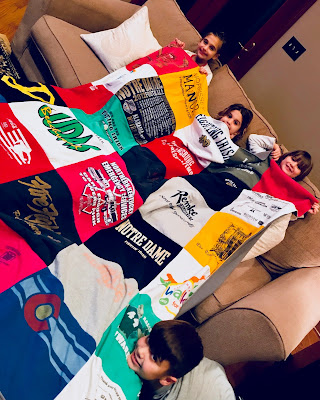 They miss him so much. I do too. And I say, "I miss your daddy," so many times a day that I probably don't even know I'm uttering it out loud. One of the twins told me, "Mom, quit saying that all the time." I feel like I just want to keep him here, keep his memory fresh for us so that he doesn't fade like some worn-out T-shirt.

Speaking of T-shirts, I have been hanging onto a pile of his old shirts in a corner of the closet that I knew I didn't want sitting in a heap forever. His college shirts, his workout shirts, some shirts he wore to bed. Some friends of ours said they would have them made into a blanket. While I hated the thought of cutting into the fabric of the shirts he wore regularly and the scraps just thrown out, I agreed. 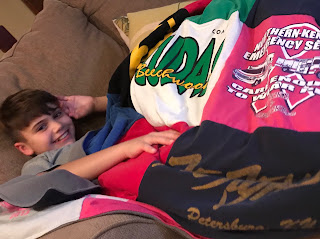 What resulted is a beautiful tapestry of my children's father that I know we will cherish forever. All the pieces of who he was, are woven together in a cozy quilt for my children to snuggle under - his favorite pastime. There's the T-shirt he wore to every country concert we ever attended - that thing could have walked around by itself. There's the green Irish shirt he wore to mow the grass or work out in. There's the red Coca-Cola T-shirt he wore out boating all the time. There are several firefighter T-shirts from the days he volunteered at the firehouse. There is that one navy Notre Dame shirt that touts the football team's undefeated 2012 season (undefeated until they got spanked in the championship game by Alabama). He still wore that shirt proudly every weekend though. There's that smaller, blue Colorado Rockies T-shirt he wore most days when he lost the weight after he got sick that sparks different memories for us, too.

All these pieces of him, memories of him, sit close to us here in the living room now. We call it the Daddy Blanket. Any time they want to feel close to him, any time they want to be near him, they cuddle with this blanket. For them, it's like having him here to watch movies with us. It's like he's near while they build a sofa fort with the blanket ontop. They all want a corner of this blanket.

I caught my son under this blanket the other day watching TV. He wasn't talking. He wasn't laughing. But I did catch him smiling.