When your husband dies within a month of the holiday and you are grieving every day for the smile of a person who has been in your life for two decades, the last thing you want to do is go shopping, eat bon bons and sing Jingle Bells. I asked my youngest if she thought Santa would bring her some new socks, since hers could fit Thumbelina, and she said, "All I want for Christmas is my daddy." That sound you hear right there? That is the sound of a heart shattering into a million pieces again. 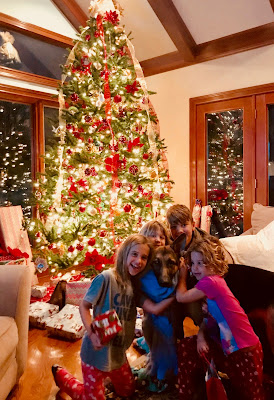 So this was the year for new Christmas traditions. We left school a little early. We jetted away to Florida to sit in the sun and build sand snowmen. We talked about daddy on the beach. I laughed with the kids about how daddy used to brag how his sandcastles were better than mine. We ate pancakes at fancy restaurants overlooking the beach and I may have had a mimosa or two by at least 10 a.m. We had ice cream sandwiches for breakfast on Christmas Eve because I didn't feel like fixing anything. Our Christmas Eve dinner was Burger King from an airport on our way back home to catch Santa at our house.

We kissed 80 degrees goodbye and got home to Kentucky late-- just in time to enjoy iced up windshield wipers and a blustery gust of cold air to knock a certain blonde child's BK crown flying out into the night. Crying ensued. I told her some poor kid who doesn't get Christmas gifts is likely going to come upon that crown and she has just made him a king tonight.

When there is no food in the house on Christmas Eve and no milk and no ingredients to make cookies, you have to be creative in what you leave out for Santa.
But we aren't creative, so we put out some stale biscotti sticks and a couple orange slices out for him, along with a glass of week-old egg nog. You also need to find eight carrots at the bottom of the crisper and throw those on the deck for the reindeer, of course.

The kids were so wound up from seven packs of Twizzlers on the airplane and the fact that the dog hadn't seen us in a week, so they didn't get to sleep til well after 11 p.m., which meant after unpacking, Santa couldn't come til after 1 a.m. Santa was so hungry by then that she ate stale biscotti for dinner. And orange slices with egg nog. And eight carrots off the deck.

New traditions can mean going easy on the stocking stuffers and presents because after all, if we've learned one thing this year, it's that STUFF doesn't mean anything on Christmas. We are alive. We are healthy. We are together. We love each other. At least that's what Santa thought when she hit the pillow at 2 a.m. Visions of happy children were still dancing in her head when she bolted upright frantic at 5 a.m. realizing that she left the ELF on the FREAKING shelf, and everyone knows that the elf goes back with Santa on Christmas Eve. So on the first Christmas ever that my children slept in (parents everywhere know this to mean 7 a.m.) I was running downstairs to hide the elf and then lie awake waiting for the next two hours for THEM to wake me up. 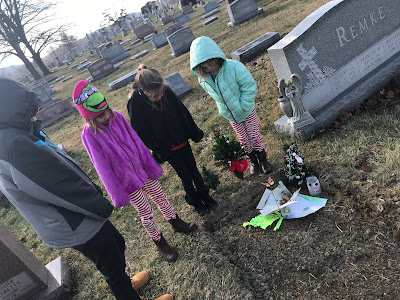 New Christmas traditions might also mean you scrap pretty, matching holiday dresses and bows for your children's attire at Christmas morning mass because you don't have the fight in you this time. You say yes to candy cane sweatpants and jeans at mass -- because you know what? God, Jesus, Santa, Buddha -- Tom Cruise -- none of them could possibly care what the kids and I are wearing this year, right? But I saw all you moms who matched your kids and brushed their hair and put them in tights and dress shoes. You did it girl, I commend you. But I just couldn't be you this time.

New traditions mean your kids bring Christmas cards to daddy at the cemetery, where we shiver and huddle around to tell him the fun stuff we got from Santa. We bring him letters we anchor down under a mini (fake of course) Christmas tree. We tell him how we hope he's warm in Heaven, having some big ham dinner hopefully watching us eat our frozen chicken nuggets for Christmas lunch because no restaurants are open and of course - we (ironically) have no groceries.

Santa gave in a little this year -- she swore no phones and big BB guns for little boys-- but then she realized that little boy is now the man of the house. His heart was broken this year so the trade off was for just a little smile. Some happiness or glimpse of hope that life can still be happy. So Santa told him not to shoot his eye out and that mom is in charge of the phone and always has the password. I heard him tell his sisters, "best Christmas ever." That was before he read the note from Santa telling him he had to text his mom emoji hearts every day.

If only dad were here, they say, it certainly would have been the best Christmas ever. 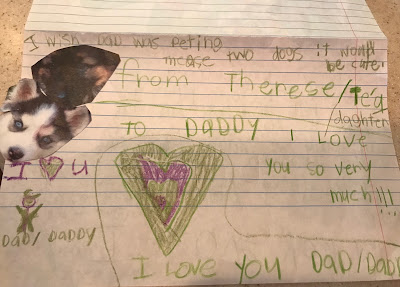