I'm having a flashback. It's a good one. It was an energetic night. There was drinking and dancing and way too much fun for 30-somethings to be having. My husband and I met friends out for dinner, but one thing led to another and we ended up dancing well past the bedtime assumed for parents of four kids. There were probably a lot of inappropriate jokes told. There was definitely reminiscing about nights before kids. And then there was someone who laughed so hard she peed her pants but still didn't want to leave.
I'm remembering that side-splitting fun - when the smile on your face hurts so bad but you can't stop laughing. The laugh lines I acquired that night were so worth it. We were normal.

We didn't know your name back then. 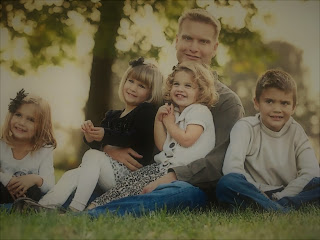 I walked in this same bar the other day to pick up a sushi carryout; but I left instead with a memory of fun times so thick and heavy I could literally taste the sugar off the rim of those blue martinis I drank that night.

I look around at these people here now. Normal people. I remember that. I remember Saturday nights when we were people who went into a restaurant and ate good food, people who drank beers and Long Island ice teas. We were the kind of people that are here now, who talked and laughed all night.Sitting there waiting for crab rangoon that I'd later eat alone, it hit me that we're not those people anymore and we never will be again. Almost two years ago, a big, royal jerk named Cancer sent us normal people packing.

Now we are sad people - angry people, depressed most days. We are people that do hospital stays, doctors appointments and chemo treatments. Feeding tube formulas and countless crushed up pills replace what once was a prime rib dinner with mashed potatoes and a Manhattan - his favorites. It's not hard to see, we are people that don't talk very much to each other, or we do so with tears in our eyes. We certainly don't laugh anymore. Fun is a concept buried far in the past.

My kids didn't know who you were. I hate you for making me have to explain it to them. I know they feel the weight of sadness in this house because of you - the fear and the doubt. Our kids, all under the delicate age of 10, feel the palpable sadness in this house each day. I am tired of telling them night after night that "daddy doesn't want to be sick," or "daddy wishes he could play with you." With terrible heartbreak, I listened to one of the twins tell the other she wishes she had her "old daddy" back.

I hate that I don't have the courage to tell them everything just yet. You'll probably force me to do that soon, though, I know.

Cancer, you took every last tear I had. I'm at a point where the sadness has turned to anger. I'm furious thinking of all the things you took from us. Laughter, happiness, time with our children - I can't tell you how many promises to our kids - Disneyworld, a camping trip out West, boat trips and future father/daughter dances to name a few - now all hang somewhere in a sad cloud of uncertainty.

While I'm at it, let's not forget to mention our intimacy. Oh, do I hate you for taking that one. (Mom, look away). I'm a mediocre mother, I can't cook to save my soul and I'm an OK cleaner, but the bedroom thing was one aspect of marriage I was damn good at. Sure, we spent many years at odds over stupid stuff (what newlywed wife DOESN'T nearly burn down the house with an accidental basement fire?) but we loved each other like crazy.

I saw two old people walking together the other day and I got so mad. There's yet another thing you are taking. The doctors have told us we probably won't have that. I won't get to grow old with that guy I met at the altar 15 years ago. We used to joke about how terribly we'd get along when we are old and wrinkly. I've told him how I'm really looking forward to having him grimace at me putting a bikini on 70-year-old saggy boobs. He joked about my being late everywhere. I laugh, "I'll probably be late to my own funeral."
He reassured me, "Don't worry, I'll get you there on time."

He used to have a sense of humor - a sarcastic, dry one - but funny as hell. But you took that, too. 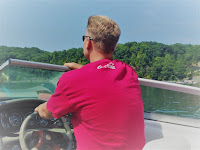 I'm mad that the nurses and doctors who care for my husband only see a frail, sick man - who some days is so weak he can't get out of bed. They don't know the person we knew before Cancer came calling. They will never see the Chris Farley impressions, or the dance moves when the DJ plays Rob Base... the guy whose biggest quirk in life was pinching cold fingers.

I'm ticked at you Cancer, that you're killing a man who was once known to breaststroke the length of an Olympic-size pool in record time. His name still hangs on a plaque at the local swim club for a record no one has broken since 1988. I'm livid that you are crushing the spirit of a guy who could drive a tractor and bale hay like a farmer but on weekends could maneuver a speedboat practically blindfolded around Lake Cumberland. You have crippled that beautiful, blonde boy I used to know who could slalom ski like an X-games athlete and still tackle a diamond level course in the mountains of Breckenridge.

I'm angry that people who see him now won't know him for who he really is - the strong man who years ago kicked kidney failure to the curb and lived a healthy, active life for 20-some years with a transplanted kidney. He is the champion who held my hand through 12 hours of natural labor, encouraging me without fail until I gave birth to his firstborn son. They won't know the tears he cries now were once tears of joy when he held newborn twin daughters in his arms nearly eight years ago. 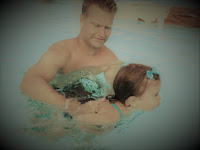 Yes, I miss when we were normal people. I know he misses it too. But in this time of despair, we have found there are countless people who hope for us - because our hope is almost gone. We have school families who pray for us because there are days we have nothing to say to God. We have fellow moms and neighbors who help take our kids to practice or bring us soup. Those are the people who keep us alive - not the drugs or the painkillers.

They are the ones who help us in the fight to carry on for our children - children who still do normal things like ride bikes and play soccer, who laugh at burps and whine about homework and my crockpot dinners. And even though you have taken so much from us, I'm letting you know, Cancer, that you can't have these memories that are left. You can't have those awesome cocktail-soaked flashbacks of us out with friends. You'll never take my recollection of the night he first kissed me. You can't erase those moments of hilarity he had with his college roommates, when I first discovered I loved him. You can't steal the vision of his old smile or the sound of laughter so deep it's just snorts. You can't take away the picture of him wrestling with our kids on the living room floor or teaching them to swim. I'm keeping all those.

The only thing left I can give you is probably just my middle finger. I think that's what any normal person would give you.