The night I almost ran off with Billy Joel

It's been 20 years since that night.
Some of you have heard the story before, and others may have laughed it off as fiction, but I assure you it's all true and it's my best memory of ever meeting a celebrity (and I've taken a selfie with Keith Urban, so there!).

I've always been a Billy Joel fan. I remember being very young listening to dad's vinyl records of The Stranger and Songs in the Attic among others, as they played on the living room stereo.
I knew every song by heart. I took all of dad's records and kept them in my room, studying the album covers. The first CD I ever owned was his Greatest Hits. His music was what I heard all the time - summer grillouts to The Nylon Curtain in the early 80s; middle school heartbreak to the Storm Front album, carefree in high school to River of Dreams -- it really is the soundtrack to my life! To this day, when I hear "Summer, Highland Falls" I will cry. And I will rock out like a teenager every time to the piano solo in "Angry Young Man."

Billy was like family to me. He was the reason I started piano lessons when I was 12. And he was the reason I broke up with a dreamy boy in eighth grade because he said, 'Billy Joel sucks.' I've been to a dozen concerts from New York to Cincinnati. I've been a Billy Joel groupie since I can remember.
I am mesmorized by his piano playing and have always admired that he also plays guitar, harmonica and accordian. Except for an occasional cover, he has written every one of his musical recordings (except a Beethoven song set to "This Night"). He is truly one of the greatest, most talented songwriters of our time.

Fast forward to Jan. 30, 1996 -- 20 years ago today-- I was a sophomore at Saint Mary's College, and friends and I got tickets to see him at the University of Notre Dame's Stepan Center. He used to tour colleges giving advice to music/theatre students (or crazed fans like me). So armed with only a Sharpie and a digital 35mm camera, we charged in and found seats up close to the stage. He would occasionally take questions from the crowd, and somehow the musical gods were smiling down because I got a hold of the mike. Sweaty palms aside, I think I did ok, with the first thing out of my mouth being, "I have loved you since I was in diapers!"
I told him I'd always been fascinated by all the names of the women he used in his songs, and I wanted to know who they were (this was, remember, before Wikipedia or searching on the Internet). Then I asked him why he hadn't made a song about 'Andrea.' At some point I also asked Billy if I was too young for him (apparently I wasn't, because his current wife would have been 14 at the time).

So Billy Joel politely laughed and answered my question about who the women were from his songs... and then he stopped and went over to the piano and to the tune of "Honesty" he sang, "Andreaaaa, is such a lonely word..." 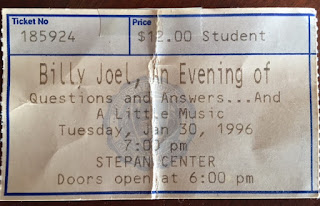 The crowd laughed and I was elated at this lucky exchange I had with Billy. After the concert, a couple friends and I waited at the back door near a parked limo, just in case we'd catch a glimpse of him leaving. There were a few other stragglers around, waiting and hoping too.

After maybe a half an hour, that door opened up and I was standing face to face with William Martin Joel. My Billy Joel. Everyone rushed for autographs - this was the pre-selfie era so none of us had iPhones, y'all! My friend grabbed my camera and managed to take the last remaining picture on the roll of film before it clicked and rewound itself (that's artifact speak). Unfortunately she centered the viewfinder on my head and cut off half of his.

As he was autographing the picture (that I tore off from the Billy Joel calendar in my dorm room) I scrambled for something to say to him. And only because my friend had just been telling me about how Bonnie Raitt's hands were insured (Bonnie plays a mean Fender strat you see), the first and only thing that came to mind that I blurted out was, "So, are your hands insured?!" I don't even remember his answer partly because his bodyguard was urging him into his limo (likely away from the bizarre girl about to bite his hands off?), but mostly because I couldn't believe Billy Joel was right in front of me.

So my friend and I manage to follow him up to the limo, where I'm completely starstruck and in awe of the man whose songs hold every piece of my heart. The door to the limo is wide open because the bodyguard guy hasn't closed it yet, and we are asking him where he's headed (150 miles west to Chicago) and we are trying to smile and keep chatting up Billy Joel, as he's sitting in there just staring at us. And he kind of gives us this look-- this "so, are you coming in?" look.

Now here's a very famous man who was recently divorced from Christie Brinkley and probably was having lots of fun on the road, especially visiting all these colleges (again, it was the pre-iPhone pics and video era) so some no-strings-attached company for his two-hour trip to Chicago would have been cool for him, I'm sure. In that moment, I thought maybe if I hop in, perhaps we'll just chat all the way to Chicago, part ways like old friends with a hug, and I'd be chauffeured back to South Bend to retire to my cozy dorm.

Nah. We all know what kind of shenanigans would have gone down in that limo and my naiive ass would have been sitting alone on some Chicago street corner with nothing but an autograph and a lot of shame. So guess what I did that night? Yep, I smiled and waved goodbye to Billy Joel as the car door closed and he drove away.

I loved Billy Joel and I love him still, but I couldn't go there. I guess this is really just a story about a sad excuse for a Billy Joel groupie. Next show, I might wait outside, but this time I'll bring a Sharpie and an iPhone.