Come on spring...where are you!?

It's been a while since I've had time to sit down and write anything lately. I don't really have time now either, since I told Brayden I'd play Connect 4 with him since the girls are napping and I told him, 'just a minute, I'll be right back...' 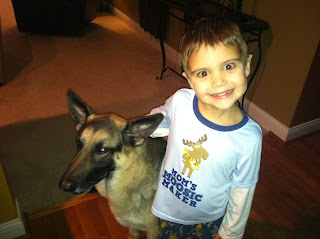 Shame on me, I know. It's hard to do anything alone, and when he's not at school, he wants to play everything, do everything and I just don't have the energy. He is into everything from Star Wars and Transformers to Legos and complicated puzzles.

Time continues to fly by, and that sounds stupid to say, but it's so true.
Brayden turned 5 last month. This fall he'll be headed to kindergarten and Matthew is already asking about whether the twins are going to preschool this year - what!? Meantime this belly is growing by leaps and bounds (of ice cream) every day. I'm going to bet anyone money this child will A) be the biggest and B) come on or before Memorial Day. I suppose I should just enjoy the guilt-free trips to DQ and the frequent chocolate malt nights I declare with Matthew on Tuesday and Thursday nights;-)
Good lord I'm going to need a big exercise plan once this is all said and done.

The kids and I are eagerly awaiting spring. It can't get here soon enough. We are getting really cooped up inside these past few weeks, despite the monstrous bouncy house we erected in the basement for their birthdays in January. The girls are half Brayden's size, so it makes it interesting (and somewhat dangerous) when he's leaping in the air and flying off the sides of it when they join him in there. Most always someone gets hurt, screams and they all end up crying up the stairs all pointing fingers. Mia's new saying is "TeTe did it." I think the other day I even heard the words, "oh bloody hell!" from my 5-year-old's mouth. I chose to ignore it and continue with the dishes since I didn't hear any crying to accompany it.

The twins are just over 2 now and every bit into the Terrible Twos. From what I remember though, the worst is yet to come, as 3 was a more terrible age for Brayden than 2 ever was. The girls wrestle and fight over every toy, book, puzzle and even who gets to turn pages or sit in my lap. It'll be a rude awakening for them once this baby gets here in a few months. We thought we'd prepare ahead of time by putting them in their 'big girl beds' now rather than hit them with another life-changer once the new baby comes to sleep in one of their cribs. Except for a few times of playing together in Mia's bed and jumping up and down, they've done pretty well with staying in them at night and sleeping.

In other shocking news, people might gasp to hear that we finally gave in and bought the dreaded "M" word. Yes, a minivan. I thought this day would never come, in fact I believe I even penciled it in the wedding vows we said to each other almost 10 years ago, but here we are, with (soon-to-be) four kids, a German shepherd, multiple strollers, toys, baby bags and a big momma with an aching back, heaving everything in and out of the SUV has become too much. Matthew will drive my Landrover (sniff) and I will luckily/reluctantly drive the new minivan next week when we pick it up. At least I can say it's a sporty model and I'm tinting the crap out of the windows and I will refuse to tack any of those horrid 'soccer mom' or dorky 'stick people' bumper stickers anywhere on this vehicle. Oh, and I'm still going to drive like hell ;-)

Gotta wrap it up, the boy has given up on Connect 4 and is on to Transformers play. Time to put my Optimus Prime hat on. God give me energy!