I remember writing in and crying over a diary in my bedroom at age 16 or so. Because when I was heartbroken— whether it was from a breakup, my feelings of uselessness or just teenage angst—I would write. I have always been an emotional person but I never really liked TALKING about those emotions. I am a loud mouth but certainly not about feelings. Normal people vent that stuff to their moms, siblings or friends or eventually a spouse. I have always taught myself to just sit with those feelings. I felt more comfortable writing them instead. Sure, I've gotten over teenage heartache and it now seems insignificant looking back. But that's not to say it didn't hurt like hell right then and there.

I got back into writing and sharing fervently in the months and now years after Matthew died because it was the only outlet I knew that felt like release. Tons of spiral notebooks and journals hold the majority of my feelings. I had so much sadness, anger, frustration, regret, guilt. And I sat with so many unanswered WHYs. I didn't want to burden anyone talking about the heartache either and I already knew what my mom and sisters would say as the only remedy, which was to pray. But I was too tired and angry for that. But with writing, I don't have to hold up the other end of an uncomfortable grief-y conversation or answer questions that will likely break me.

Even professional therapy is hard for me to keep up with and I'm sure it helps people like me to sort it all out. But some days I think, you know I can just save that $200/hour by just going to the library for a pile of self-help books. Maybe I'll download a new yoga app—I mean it's hard for me to keep quiet longer than 18 seconds, but it's easier than going to talk about feelings. I just don't like to do it. For graduating college with a communications degree, I sure have some pretty horrible skills when it comes to dialogue with another person. I just don't have the answers to questions that come after personal sharing. I don't know WHAT event caused me to feel insecure about XYZ. I don't know WHICH life moment made me feel unlovable or unworthy of good things. I don't know exactly WHO always made me feel desperate for approval in life. I only know that I feel this way and that's that.

But all the above can lead to a recipe for disaster when it comes to personal relationships and mine are no exception.

I haven't said much about love lately, and frankly I'm sure not many people really care. But with sharing a lot of my journey with family and friends over the past several years, it's not an element I want to omit or fake— because that's just not who I am. I had been seeing a great guy for over two years and my children and I have become very close to him. But because he was a very introverted, private person, I tried respecting that by not sharing stories or pictures of him or his children out to the world. Which was very hard for me. Because when I'm having a good time out here living or loving, I want to share it, document it, scream it from the rooftops because I know how quickly good things can be ripped from you. But for him, it was the last thing he wanted. Mixing introverts and extroverts is risky business too, trust me I know from experience. But when you stir in relationship baggage, emotions, different stress coping habits and miscommunication (mainly because the communications major probably should have chosen Poli-Sci instead) well, the risky business just becomes a futile attempt to keep two people together who have incredible physical chemistry and laugh at the same jokes. Both of which can wane over time despite living in close proximity to each other in the most beautiful of geographic climates.

So I'm writing today. To say that dating as a 45-year-old widow with four kids isn’t easy and there is still heartache even though I’m not a teenager anymore. I will continue to investigate my faults and shortcomings in life, especially in relationships. I’ll accept my failings but also realize I can’t change myself in order to fit another person’s needs. No matter how much I loved and adored this guy, and still do. I will balance emotions that sometimes violently rupture at the surface. In therapy or not. I tell myself I will grow from the people who come into my life—good or not so good. I won't regret any of it. I can turn this experience into a lasting friendship. I'll try and continue to mend pieces of me that are broken. Sure I'll get over the heartbreak. I've been through some of that before.

It doesn't mean though that it doesn't hurt like hell right here and now. 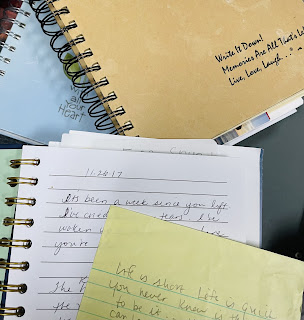